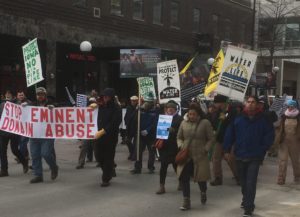 One year ago today, Iowans rallied at the Polk County Courthouse to support landowners suing state government over the abuse of eminent domain to build the Dakota Access pipeline. That case now advances to the Iowa Supreme Court. Its ramifications for other eminent domain fights, climate change and water quality are significant.

Today, one year later, Bold Iowa issued the following press release. Please take a few minutes to read and share it . . . and please make a donation to support our work as we rely almost entirely on grassroots support!

The lawsuit filed by Iowa landowners and the Iowa Sierra Club against the use of eminent domain to build the Dakota Access pipeline is expected to come before the Iowa Supreme Court sometime in 2018. Plaintiffs and observers feel landowners have a strong case, in part because a 2006 Iowa law prohibited the use of eminent domain by private companies. Many people, including numerous legal experts, feel the Iowa Utilities Board (IUB) erred in granting Dakota Access eminent domain authority to take land by force to build an oil pipeline. That pipeline continues to be controversial, in part because it merely transports oil through Iowa without offering any direct public benefit to people living along the route.

“We feel the IUB’s decision was a clear violation of Iowa law,” said Ed Fallon, director of Bold Iowa and a former Iowa lawmaker. Fallon’s last vote as a member of the Iowa House was in support of the 2006 eminent domain legislation clarifying that eminent domain was not to be used for a private purpose.

Other grassroots groups committed to building public awareness about the importance of this lawsuit include Indigenous Iowa, 1000 Friends of Iowa, the Bakken Pipeline Resistance Coalition and 100 Grannies for a Livable Future. That list is expected to grow as interest in the lawsuit builds.

“The problem is most people don’t know about the lawsuit or its potential impact on all of our lives,” said Fallon. “With an aggressive campaign set to begin in January, Bold Iowa and other groups will push hard to increase public awareness of this potentially precedent-setting court case.”

Fallon and others believe the lawsuit has broad implications for other eminent domain battles, for private property rights, for Iowa’s water and land resources, and for climate change. “This case has historic implications for people across the state, yet few people are tracking it. Our challenge is to educate Iowans about what’s at stake and encourage them to pay close attention.”

Fallon indicated that he and others are working to flesh out the details of their effort and raise funds to make it happen. Strategies under consideration include:

Bold Iowa was formerly part of the national Bold Alliance and is now an independent non-profit organization that addresses the climate crisis, opposes the misuse of eminent domain to expand fossil-fuel infrastructure and other private purposes, promotes individual and entrepreneurial efforts in renewable energy and energy conservation, and works to build a broad, urban/rural coalition of Iowans. The organization’s website is www.boldiowa.com.

Bold Iowa’s director, Ed Fallon, served in the Iowa Legislature for 14 years before running unsuccessfully for governor in 2006 and US Congress in 2008. Since 2009, he has hosted a talk show, The Fallon Forum, which airs on six radio stations and is available online. Ed has directed Bold Iowa since its inception in March of 2016.