Sestak was interviewed by Ed on the Fallon Forum. 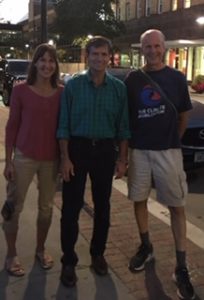 Rep. Sestak spoke to the Downtown Des Moines Democrats. He mentioned climate briefly in his stump speech, then responded to a question from Kathy about the Dakota Access Pipeline. Kathy informs Sestak that Energy Transfer Partners wants to double the flow of oil through DAPL. She asks him what he has to say about how that increase of oil would impact Iowa.

Sestak admits that, before coming to Iowa, he wasn’t aware of the distinction between DAPL and the Keystone XL pipeline. He points out that he was the only Congressman in Pennsylvania to call for an end to fracking. He sees no need to expand DAPL as it takes us in the wrong direction when it comes to addressing the climate crisis.

Valerie reports that it was noisy in the venue so it was hard to hear, although she did display a climate-is-a-crisis sign. She did hear Sestak mention climate change many times but couldn’t get the complete drift.

By the time Sestak got to Valerie, she basically pointed out something on his flyer. He feels companies need to pay for any penalties on pollution. She doesn’t agree with that as many big companies have the money and just write their penalties off…and consumers end up paying.

Shaun captured a woman asking Rep. Sestak, relevant to climate change, “How would you propose to improve communication between the scientific community, the media, and the public?”

Shari reports: “While at the Iowa State Fair, Samantha recognized Admiral Sestak in the street in front of us, surrounded by a group of people with cancer t-shirts and not a lot of press. We waited until he was done talking with them, and then Samantha asked if he would talk about climate on the soapbox. He assured her that he would.”