Kathy interviews John Delaney on this week’s “The Fallon Forum.”  Ed had laryngitis, so Kathy filled in for the interview.

Congressman Delaney has agreed to be in a Climate Debate–he’s in!! 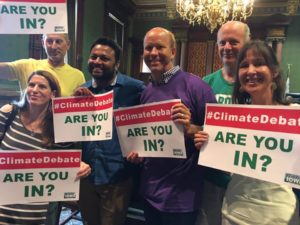 Holly Hart reports: “Delaney had just been talking about the technology which uses natural gas, and apparently captures the carbon [perhaps Allam Cycle technology]. So I first asked him where that natural gas was coming from, then, based on what he just said, if he plans to shut down the pipeline. His response about Tar Sands and the pipeline sounds good, but he did not respond to my question about where the natural gas was to come from. Obviously, I wanted to hear something about fracking.”

Here are Ruth’s reflections on her conversation with Delaney: “He dismissed The Green New Deal out of hand when it was brought up. He wants to invest in research for machines to pull carbon out of the air. When I said that regenerative agriculture does that already he was completely dismissive. He also thinks that making carbon use more expensive will induce companies to invest in alternative energy solutions. Historically monetary incentives have not induced companies to change their infrastructure.”

Julie Fischer writes: “Delaney makes a likable presence but no passion. He misses the low hanging fruit. His main message, about which he showed the most excitement, was for huge machines to suck carbon out of the air and inject it into the soil. First off the machines are not affordable yet; secondly, they run on fossil energy, most likely; third it would take a long time to get it going — in the meanwhile, zero result if we do not decrease emissions. His first solution is a carbon tax, and give that money back to the people. How would that work? So the people could fly more trips?

“I was not impressed. The most real solution exists right here in Iowa: the Energy District Model, based on the Soil and Water Conservation Districts, which proliferated across the country in answer to the Dust Bowl Debacle and are still working!

“Every candidate who comes here needs to be informed about this replicable model. It is triple WIN. You hire youth to do hands-on home assessments and modifications. They learn skills and energy saving for the rest of their lives and their children/families/friends. They get a Greenmericorps stipend at the end for grad school or to pay off school loans. The home owners gain awareness, knowledge of systems and home condition and save around $400. Every state cuts its energy footprint — so no more need for new power plants, more incentive for further insulation, solar, etc.

“How did the New Deal work during the war? We asked every American to do their share, to help. This effort could do the same — and if people are asked and it makes sense, we get the mass buy-in we need to create real change. My take. I have a letter to Delaney in the making. Meanwhile the Energy District is researching doing a video of what their model does for dissemination to all candidates.”

John Delaney came to a meet-and-greet with Grimes Area Democrats. When asked by Ed if he would make climate change is top priority, Delaney said that Americans are facing lots of issues, which seemed to be dismissive of the urgency of the climate crisis. But then he said that we’re running out of time on climate change and that it’s a problem that demands immediate attention. He listed a handful of specific actions he’d take.

Samantha and Sid have been tenacious at attending multiple candidate events and asking climate questions. (John Delaney even greets Sam by name!) In Grinnell today, Sid asked about the Green New Deal and the Dakota Access Pipeline. Her question and Delaney’s response can be heard at the 10:30 mark.