Ed’s interviews democratic presidential candidate Tulsi Gabbard on the Fallon Forum.  See what the Congresswoman from Hawaii has to say about renewable resources, the OFF act, her change of opinion regarding LGBQT matters and the problems in Syria.

Lysa reports: Magenta and I went to Rep. Gabbard’s Town Hall in West Des Moines Saturday, and Magenta got to ask a question. She’s at 39:10 minutes in, asking a pertinent Climate Change question regarding the burning of the Amazon.

Both Phil and Kathy were able to ask questions during the Q&A time, although we were only successful at capturing video of Kathy’s question. Kathy also thanked Gabbard for visiting Standing Rock during the pipeline fight, and that drew a round of applause from attendees. 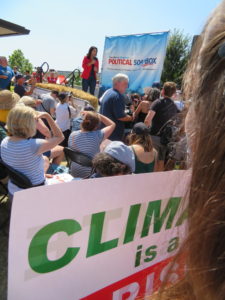 Tulsi Gabbard talked about climate for just over a minute while on the soapbox at the Iowa State Fair. Kathy Byrnes talks with Tulsi Gabbard at the Iowa State Fair before she steps onto the Des Moines Register’s Soapbox.

Tulsi Gabbard speaks about climate on the Des Moines Register’s Soapbox at the Iowa State Fair.

Bold Iowa bird dog Samantha Kuhn asks Tulsi Gabbard about how important the climate crisis ranks in her list of priorities and what she would do about it from her first day in the Oval Office.  She also talks about how the label “climate denier” should be gotten rid of, so it’s just people talking to other people in regards to the problem of climate change.  See below for transcript.

Gabbard: Looking at what we can do at the executive level is to undo a lot of damage that Trump has already done, especially with a lot of the fossil fuel corporations and many of the other industries that are, which are largely going unregulated right now. … Working with Congress to pass the kinds of climate legislation, like the ones that I’ve introduced, to be able to start making the bold change that we need to see. I’ve made it a priority in my budget that we are going to make those investments … to protect us now and to protect our planet for the future. Making sure that as I am meeting with leaders of other countries of the world, as we are starting out of the White House that this issue is brought up. That is of a common concern.

Kuhn: So you are saying, you know, where would you rank it in terms of your issues, in terms of importance in your mind to our country once you entered the Oval Office?

Gabbard: It is at the top of the list. There is no question about the existential threat that climate change poses. I talk about nuclear war. That is also a threat. I mean, we are in a position today where we have nuclear missiles pointed at Russia, Russia pointed at us. And this needs attention, because leaders in Washington are not thinking about the consequences of their actions, thinking far enough. And these are missiles on a hair-trigger alert. We could get an alert right here, right now, saying there is a missile coming to Cedar Rapids, Iowa. Where do we go? What do we do? Like it’s done, game over.

Kuhn: You said seek shelter. I’m like, seek shelter WHERE from a nuclear weapon? That doesn’t even make sense.

Gabbard: Yeah. So to me it’s not a question of, well, we are only going to deal with the escalating nuclear threat and ending the Cold War, or we are going to deal with climate change. These are things we have to do now, simultaneously. We’ve got to be able to do more than one thing at a time.

Kuhn: This is a bi-partisan issuem but there are many climate deniers. How would you go about trying to difuse this.

Gabbard: Breaking it down, taking the conversation away from climate science and climate change, and calling them climate deniers … I wouldn’t give them a name that causes that them to feel like they are being other-ized. But instead just say, Hey, I have a lot of Republican friends, who we agree with the approach I am taking, the priority that I am facing, but they do agree, they’ve got little kids they love, and they care about those little kids to be able, they want them to just live, have a good life, to be able to go swimming. And to, you know, I mean, appreciate all the things that we do cherish. This is what has been so … why we have … and … connections … very little conversation. I respect you, and you respect me. Let’s start there. That’s how we make change. That’s how we make progress. That’s how we get more people on these bills that are bipartisan. And they’re not things that they are afraid will be weaponized and used against them during an election. The things we can all stand on. I don’t care where you live, we need clean water to drink, we need to make sure that we don’t have toxic fumes being blown in our air and our environment. These are things that are common for everyone.

Meeink: Take a video of the mean guy.

Kuhn: Rob’s not the mean guy!

Gabbard: Thank you so much. It’s nice to meet you.

Holly Hart writes: “There were only about three questions. The first was in regard to the Middle East, specifically Palestine. Prior to that, she had just been speaking about the increased possibility of nuclear was as a huge existential threat and the need to re-orient military spending. Mine was the second question, which is why I reference ‘another existential threat’ and the possibility of military spending being rerouted to climate change mitigation – not in so many words, but that was the context.”