In the first video, Marianne Williamson says that the climate crisis demands a WWII-scale emergency mobilization. In the second video, Kathy asks what Williamson how Grinnell College and Grinnell High School students can be more involved in efforts to fight climate change. 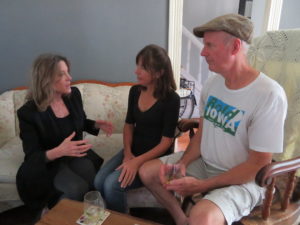 After the program, Marianne visited Birds & Bees Urban Farm, continuing the conversation relating to climate and farming. Click here and skip to minute mark 52:43 to hear that conversation.

Shaun writes, “Williamson talked about the climate crisis in her stump speech, among other things. Marty talked to a CBS reporter and we both talked to a reporter from Iowa Starting Line. We got a brief amount of time with her after the event and expressed thanks for talking about the climate crisis, disappointment that Inslee has been the only one who has emphasized solutions to the crisis, and asked for a commitment to a Bold Iowa climate debate if the DNC opts not to host one. She unfortunately did not commit. ”

Marianne Williamson responds to Climate Bird Dogs urging her to make the climate crisis her top priority. Thanks to Jeannie McCrea for capturing the video.

This was an invitation-only press event. Ed Fallon and Kathy Byrnes asked Williamson questions at the 19:20 minute mark and Channing Dutton at the 49:00 minute mark.

Tasida Barfoot and Channing Dutton asked Marianne Williamson about climate change and the Green New Deal at her campaign launch in Des Moines (first five minutes or so of this livestream). We had different take-aways from this event, with some of us feeling she said very encouraging things about climate, indicating that she understands how urgent it is. There was concern that her responses were often way too long and rambling, making it tough for others to get questions in. But she did leave plenty of time for questions, and the space was adequate for the audience.