Ed Fallon woke up one fall morning in 2014 in pain, on a hard, cold piece of ground outdoors. Lying under a tree stand along a highway west of Washington, D.C., he imagined that the cacophony from nearby traffic was chiding him for being a failure. The activist, former state representative from Des Moines and online talk show host of the Fallon Forum wondered if he really was. 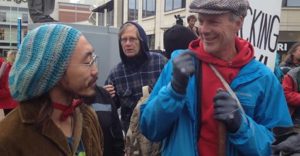 So begins his newly published book, “Marcher, Walker, Pilgrim.” It lures you in, piquing curiosity about the night of wild behavior that no doubt preceded this awakening. But Fallon wasn’t tossed from a moving car after reckless partying. He’d taken refuge along the highway while walking across the country to save the Earth. He organized the eight-month, 3,000-mile trek to call attention to climate change, and in that moment, was wondering if it was worth it.

Maybe you’ll find the answer in the 330-page narrative published by Des Moines Business Publications. But from the first page, you understood that Fallon’s account of “The Great March for Climate Action,” won’t be some scientific analysis of why we have alternating droughts and floods, and occasional July winters and December summers. Nor does it get into the fine points of government land, air and water policies or how we can turn back the clock on so-called progress. His book is more of a tribute to the natural world as he and some 35 to 50 walkers experienced it in their quest to “wake people up to what’s going on before it’s too late.”

Fallon, who spent 13 years as a Democratic representative in the Iowa Legislature, has long been a maverick (he might even say misfit) in Iowa politics because of his tendency to go his own way. He broke ranks with the party in 2000 to support Green Party candidate Ralph Nader for president over Al Gore. Fallon gave up the seat in 2006 to seek the Democratic nomination for governor, but found the party less than eager to embrace what some of its faithful considered a defector.

Fallon is also a musician who marches to his own beat, and seems most at home doing direct action in support of a cause. He lives by his principles, raising chickens and riding his bicycle. He does own a rusted, battered 1997 Subaru, as he describes it.

At a Dec. 2 book launch in the East Village, he called the walk “the most difficult thing I’ve done in my life.”

He writes of the “tens of thousands of conversations” he and other marchers had with people along the way, and how he relished seeing urban progressive marchers talking to rural conservatives. He recalled hearing an evangelical Christian Republican in Nebraska say, “I know Jesus wouldn’t want us abusing the land like we’re doing.”

Contending the three worst industrial inventions were television, the nuclear bomb and the automobile, Fallon describes the interstate highway system as “the most soul-sucking, isolating travel experience imaginable,” but for many, the only viable transportation option, yielding “ever bigger, wider swaths of asphalt and concrete.”

One of the casualties of a car-centric culture, “possibly the worst contributor to climate change,” is something that seldom gets attention: roadkill. “Modern civilization exacts a high price on any life that strays into the path of its ‘progress,'” he wrote. “We look away from roadkill because to pay attention compels us … to examine our personal choices involving mobility, lifestyle and so much of what underlies modern living.”

His reflections on climate change segue to the trappings of modern life and its isolation. “We’ve bought the notion that independence means being able to do whatever we want, whenever we want, without anybody’s help.” The antithesis, then, was being welcomed, fed, sheltered and thanked by native peoples across New Mexico, staying in a Hindu temple in Taos, and interacting with Buddhist, New Age, Methodist and Catholic communities who “truly comprehend the peril of climate change.”

Interspersed with tales from the road are deeper reflections on life that walking and being outside can inspire. Those include Fallon’s search for love after his second divorce in 2010, and his search for meaning, beginning when he was 11 and turned to devout Catholicism. That didn’t last. In an especially poignant moment during his book launch party, Fallon was reading aloud about the origins of his close relationship to nature, where he found respite from the blows of Catholic school teachers. Overcome by emotion, he handed the book to someone else to read.

The author offers tips on little things people can do to protect the environment, including line-drying their laundry and growing their own food. His book prompts us to think about our own behavior as consumers and our relationships to nature. And it offers a refreshingly candid glimpse into the heart, mind and motivation of a climate-change activist.

{Contact: rbasu@dmreg.com Follow her on Twitter @rekhabasu and at Facebook.com/rekha.basu1106. Her book, “Finding Her Voice: A collection of Des Moines Register columns about women’s struggles and triumphs in the Midwest,” is available at ShopDMRegister.com/FindingHerVoice.}