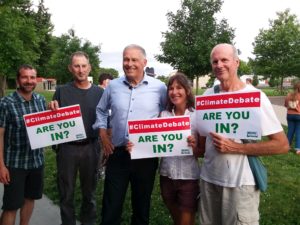 Kathy reports: “Jay Inslee enthusiastically responded ‘YES’ to our invitation to participate in a climate debate.” 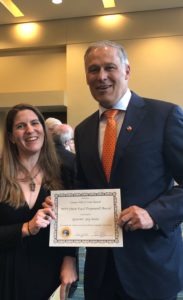 Inslee receiving his MVP award (Most Vocal Proponent) from Bold Iowa at the Hall of Fame Reception from bird-dog, Samantha Kuhn. Inslee received this award due to climate change being his main platform and always speaking about the issue at length during his stump speeches. He is also the presidential candidate with the best climate policy track record.

Samantha introduces Governor Inslee before his speech to the Asian & Latino Coalition. 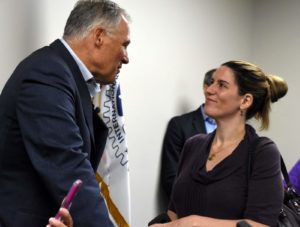 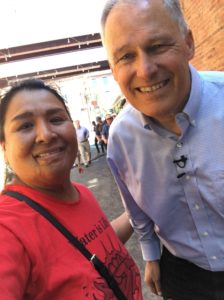 We put Jay Inslee in touch with Jo Ironshield, Regina Tsosie, and Michael Wilcox to learn more about the impact of flooding on Davenport. Josie writes, “The visit went great. Inslee talked a lot about getting off fossil fuels by 2030. We also talked about the Dakota Access Pipeline, the two Bold Iowa marches in 2017 and 2018, and the landowner lawsuit. I was also interviewed by CNN and The New York Times.”

At last — a presidential candidate who grasps the urgency of the moment! (Check out the video that kicked off Inslee’s campaign.) Inslee has made climate change the central feature of his campaign, and we hope his entry into the race will help push other candidates to make the climate crisis their top priority.

During Inslee’s first visit to Iowa, Sam Kuhn asked why other candidates aren’t prioritizing the climate crisis. Inslee said, “We just do not have any more time.” He went on to remind the audience of what happened in 2009, when President Obama focused on health care, which while important, “took up all the oxygen, and there wasn’t enough left to do climate-change legislation.”