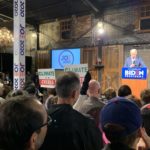 FOR IMMEDIATE RELEASE Wednesday, January 20, 2021, 1:30 pm CT Contact Ed Fallon at (515) 238-6404 or [email protected] — www.boldiowa.com Biden must keep his promise to stop DAPL expansion As the President shuts down Keystone, Iowans remind him of his opposition to DAPL Des Moines, Iowa — Leading up to the 2020 Iowa Caucuses, Joe Biden told Bold Iowa climate activists on several occasions that he opposed the Dakota Access Pipeline (DAPL). (View the record of Bold Iowa’s interactions with Biden on ten occasions.) On August Continue reading →
Farmers Have Long Memories: Trump’s Climate Record Could Hurt Him in Iowa Farmers Have Long Memories: Trump’s Climate Record Could Hurt Him in Iowa In rural Iowa, farmers bearing the brunt of climate change may play an outsize role in electing the next president. by Judith Lewis Mernit Published on October 14, 2020 Keith Puntenney never gave his permission for the Dakota Access Pipeline to cut through his Iowa farmland. When, in 2016, the state took the land anyway, he and several other landowners sued Continue reading →
The escalation of climate change, coupled with the decision this week by Judge Boasberg to shut down DAPL, opens the door to a new conversation about Iowa’s role in addressing the climate crisis. Geri, you are in a unique position of leadership and influence. It is no exaggeration to say that, at this moment, more than any other Iowan, you could have an immensely profound impact on the climate crisis.

That's easy: Sen. Amy Klobuchar. Climate activists also have reservations about Joe Biden and Pete Buttigieg, but hands-down, Klobuchar is the worst. She claims to want to address climate change, but emphatically supports the continued build-out of fossil fuel infrastructure. Sorry, Senator. You can't be pro-fracking and pro-pipeline and say you're going to address the climate crisis. Since the corporate media have ignored Klobuchar's track record, it's up to us to get the word out. November 7, Johnston. Kathy Byrnes asks Klobuchar about her stand on DAPL and Line 3. Klobuchar again dodges the DAPL question, making some vague reference to Standing Rock. Regarding Line 3, she speaks about “calling for it to be delayed so that there’s an environmental review,” even as her track record and other public statements have made it clear to Minnesotans that she would never buck Big Oil's interests.
In the fight to save all that we know and love from climate chaos, it sometimes may seem like we're spinning our wheels. Yet every once in awhile, Energy Transfer, the corporation behind the Dakota Access Pipeline (DAPL), will let slip a truth that lets us know we truly are making a difference.
The Gazette Excerpt: In Iowa, at least two dozen objections have been filed with regulators, including one from the state Justice Department’s Office of Consumer Advocate pushing back against the company’s request that the utilities board waive a public hearing. Go here to file your own objection. Continue reading →