This weekend, an estimated five million people turned out for 673 Women’s March events across the U.S. and around the globe. I attended the Des Moines rally where an estimated 6,000 people showed up at the Iowa State Capitol. The organizing team — including former congressional candidate Kim Weaver, West Des Moines City Councilwoman Renee Hardman (at right) — did an incredible job in a short span of time. 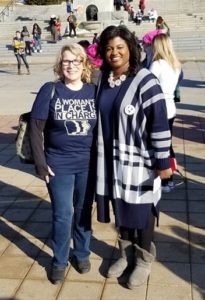 I was encouraged to see the voices of Indigenous women featured prominently in rallies across the country, including Des Moines. Christine Nobiss of Indigenous Iowa gave one of the most passionate and inspiring speeches I’ve ever heard.

Here’s the link to the livestream of Christine’s speech, and the text is included in its entirety, below. 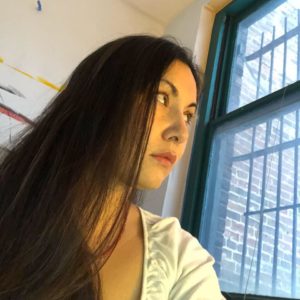 I want to say thank you to the organizers for having me on this stage at the last minute. In these settings, Indigenous people are often overlooked. We overcame assimilation and extermination but we are still often ignored or romanticized by settler-descendant society. I had to ask to be here because there was no Indigenous representation in the line-up. I’d also like to say thank you to Ed Fallon and Heather Pearson from Bold Iowa who also asked on my behalf.

I’d like to start by saying why is it so important that there be Indigenous representation here. As the original inhabitants of Turtle Island, we should always be represented at forums like this to pay respect to the land on which we are standing right now. And with that in mind, I’d like to honor the Meskwaki Nation, the only First Nation left in Iowa. And we can’t forget all of the other nations that thrived in this area of the world before they were murdered or removed — the Ioway, the Omaha, the Ho-Chunk, etc.

This March is about many things, but primarily it is about empowering women. The reality is that Native American and Alaska Native women endure the highest rates of rape and assault in this country. Older statistics told us that one in three Native American women will be raped or experience sexual assault in their lifetime, but recently that statistic has been moved to 1 in 2.  A new Department of Justice study shows that of over 2,000 women surveyed:

Experts say these astonishing statistics still underestimate the number of women affected by violence because the infrastructure for women to report and handle incidents is underfunded. Also, there is a lack of local law enforcement on reservations and tribal courts do not have the jurisdiction to prosecute non-tribal members for many crimes like sexual assault and rape–even if they occur on a nation’s territory. And our men our also facing similar statistics.

This leads to my next point. Missing and murdered Indigenous women and girls: on some reservations in the United States, Native women are murdered at more than 10 times the national average. In Canada, it is 6 times the national average and there are currently over 1000 missing Indigenous women there. It is no different here, where the rate of missing women is astounding but has barely made a dent in mainstream newsources. These women are either dead, ran away or have been sold into the sex trade that exploits our vulnerable population. Here in Iowa, the Meskwaki have taken the initiative to protect their people and have started a program for missing and murdered indigenous women that is led by my good friend Dawson Davenport. He recently created the Rita Papakee Foundation in dedication to this missing Meskwaki woman. It provides resources for families and educates the public about this serious issue.

With all of this being said, I have to ask, do you think Donald Trump and his misogynistic, white supremacist administration is going to help or hinder us in our fight to overcome this awful realty? I think not. This Administration has already announced that they will make cuts to the Department of Justice. This means that the violence against women act is in jeopardy. This act has specific programs under it that are targeted towards Indigenous women because of our crisis status. This is something to keep in mind as we move forward in 2018.

Furthermore, I’d like us to keep in mind that Trump has a vendetta against the Indigenous people of Turtle Island. Back in the 80s he lobbied very aggressively against us and our gaming rights. He has been quoted saying, “Well, I think I might have more Indian blood than a lot of the so-called Indians that are trying to open up the reservations.”  In fact, his 27-member Native American Coalition states that his presidency will minimize federal oversight and regulations through the privatization of our lands. He is not doing this for our well-being but to exploit the resources on our land.

It is estimated that Native American land holds about 30 percent of the nation’s coal, 50 percent of potential uranium, and 20 percent of known oil and gas. He wants to deregulate federal control on reservations and allow private entities to entice poverty-worn Nations with money in order to take their land. This is what Winona LaDuke calls predatory economics. This could undo our sovereignty, undo 500 years of resistance and 100 years of policy-making that has led us to a semblance of self-governance.

And, it may not be obvious but the health and safety of Native American women and men are directly linked to the health and safety of our land. It has been reported by many Native people that they feel much safer when they are living within their own communities where identity and purpose are linked to the traditions and cultures that rest on Sovereign territories. Basically, our Indigenous women’s body sovereignty is directly linked to the sovereignty of their first nation. And Trump is systematically and viciously trying to dismantle that.

However,  even with his portrait of Andrew Jackson hanging in the Oval Office, he has yet to realize the tenacity and strength of our people. We were the first to fight a corrupt, imperialistic, genocidal, slave trading, white supremacist government. We were the first environmentalists in this country and the first revolutionaries. And, we have been doing this for over 500 years. We have experienced much more than what he and his administration have even begun to attempt. We have shut down bridges, taken over buildings like Alactraz, and protected sacred areas that rightfully belong to us. We have set up resistance camps for hundreds of years. We have fought in the Walleye Wars, Oka, against Custer, fought for rivers in the northwest, mountains in the southwest, fought against commercial expansion in the Northwest and for the integrity of the ocean in the southeast. We took over the Bureau of Indian Affairs.

Basically, what I’m trying to say is that we will not to be easily oppressed anymore. We are coming out of the darkness and there are many of us that continue to fight this government and their manifest destiny campaign. Trump is but a manifestation of what this country was truly founded upon. And before I conclude I’d like to pay recognition to the our Latin, African American and Asian American brothers and sisters who have also endured a long history of extreme violence and oppression in this country. I’d also like to recognize the more recent immigrants into this country and the Two Spirit community that are also experiencing the same issues. And I’d like to say thank you to all of the settler descendants that are taking a stand and fighting for a better future for all of us. The imperialist agenda is to divide and conquer, but together we can overcome this.

And I would like to give a shout out to Bold Iowa, the Bakken Pipeline Resistance Coalition, the Sierra Club and Indigenous Iowa for continuing to fight the Dakota Access Pipeline here in Iowa. Thank you.