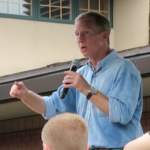 Regardless of who you're supporting for president, check out my interview with Tom Steyer. It's encouraging that Steyer's top priority is climate change and that he's had a strong track record over the past decade working to mobilize Americans to take action. My second guest on this week's program is Thomas Linzey with the Community Environmental Legal Defense Fund. More and more cities are passing local ordinances protecting their communities and natural resources against polluters. But what happened in Florida recently is the first time a political party has adopted a resolution protecting the "rights of nature."
During the fifth Democratic “debate,” Big Media again reminded us why it is culpable in enabling humanity’s blind rush toward climate chaos. As was the case in the previous three debates, climate got short shrift. Despite that, several candidates found opportunities to highlight the urgency of the crisis, inserting it into non-climate questions.

Dear Friends, FIRST … On Friday, September 27,  at 11:00 a.m. at The Federal Plaza, 219 S. Dearborn St. in Chicago, Dakota Access Pipeline opponents will hold a rally and march to demand that Illinois Governor Jay Pritzer declare a climate emergency and halt doubling the capacity of the pipeline. Some of Iowa’s water protectors are hoping to join our friends in Illinois. SECOND … We witnessed an historic groundswell of climate-strike actions last Friday, garnering attention across Iowa and around the world. Des Moines: Here’s Continue reading →

With the recent collapse of the second largest Emperor Penguin colony, Bold Iowa’s Climate Refugee Penguins greeted presidential candidates at the entrance to the Polk County Steak Fry with a poignant message about the tragedy of extinction in the New Climate Era. Penguins danced to R.E.M.’s “It’s the End of the World as We Know It” as the Fossil Fuel Reaper cut them down one by one with his sickle. The Reaper then began to take out humans, with the message that climate change threatens all of us with extinction.