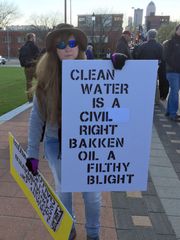 Daenna Newkirk of Des Moines protests the Dakota Access Pipeline at an event in 2015 at the Iowa Capitol in Des Moines. (Photo: William Petroski/Des Moines Register)

Criminal sabotage of Iowa pipelines, telecommunications facilities, water treatment plants and other critical infrastructure could result in long prison sentences and large fines under a new state law approved by the Iowa Legislature in its 2018 session.

The measure was drafted by state homeland security officials in the wake of millions of dollars in damage that protesters inflicted on Iowa sections of the Dakota Access Pipeline, before the crude oil pipeline became operational in June 2017. The new law has created the new crime of “critical infrastructure sabotage,” which is a Class B felony. It is punishable by up to 25 years in prison and a fine up to $100,000.

The Republican-led Iowa Senate rejected an amendment that would have made it clear the legislation would not ban picketing or other public demonstrations. Some Democratic lawmakers said the new law could have a chilling effect on pipeline protesters and that all the criminal acts described in the legislation were already covered by Iowa law.

State officials acknowledged that Iowa law had allowed criminal charges for terrorism, arson, burglary and criminal mischief. However, that law did not specifically include “critical infrastructure,” and owners of those types of facilities wanted criminal charges to apply when their operations are damaged.

Hundreds of Iowans protested the construction of the Dakota Access Pipeline, and many were arrested in demonstrations along the pipeline route over the past two years. Most protests were peaceful, but some were intended to delay completion of the pipeline project.

Lobbyists registered in support of the legislation included a host of other businesses and organizations, including Iowa Association of Business and Industry; Energy Transfer, CenturyLink; Magellan Midstream Partners; Iowa State Police Association and others. Opponents included the Iowa chapter of the Sierra Club; Iowa Citizens for Community Improvement; Iowa Federation of Labor, AFL-CIO; Bold Iowa; Iowa Building and Construction Trades Council; and others.

Indian tribes and environmental activists fought the 1,172-mile pipeline project, which crosses four states from North Dakota to Illinois. They claim it contributes to global warming by use of fossil fuels, threatens water supplies and interferes with native ancestral lands. In addition, Iowa farmers have opposed the state’s authorization of eminent domain to obtain access to their land for the underground pipeline. Litigation involving the use of eminent domain for the pipeline is still pending before the Iowa Supreme Court.

The developers of the Dakota Access Pipeline say it provides the safest and most environmentally sensitive way to transport crude oil from domestic wells to American consumers. They describe the pipeline as among the safest, most technologically advanced pipelines in the world. The pipeline is entirely buried underground and nearly all of it crosses private land. It has been built to transport 470,000 barrels of crude oil per day with a capacity as high as 570,000 barrels per day or more.