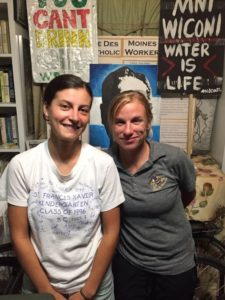 It’s been one year since two Iowa environmental activists claimed responsibility for deliberately causing millions of dollars in damage to the Dakota Access Pipeline project, but federal prosecutors haven’t filed charges against them.

The activists — Jessica Reznicek, 36, and Ruby Montoya, 28 — have gone into hiding. The lack of federal prosecution has some Iowans wondering whether charges will ever be filed.

“As representatives of people who worked on the pipeline project, it’s a little disturbing,” said Richie Schmidt, an Iowa organizer for Laborers International Union of North America. “Obviously, we want to to see anybody who vandalizes any project that our members are working on brought to justice.”

Rachel Scherle, a spokeswoman for the U.S. Attorney’s Office in Des Moines, declined to say last week why no criminal charges have been filed against either Reznicek or Montoya. But she indicated the matter hasn’t been dropped by federal authorities.

“I cannot comment on any ongoing investigation,” Scherle said.

Reznicek and Montoya, who had been involved in the Des Moines Catholic Workers’ social justice movement, held a news conference July 24, 2017, in Des Moines outside the Iowa Utilities Board’s offices.

There, they provided a detailed description of their “direct action” campaign to stop the pipeline while it was under construction.

They also used oxyacetylene cutting torches to damage exposed, empty pipeline valves up and down the pipeline route through Iowa and into part of South Dakota.

They said they later used tires and gasoline-soaked rags to burn multiple valve sites and electric units, as well as heavy equipment on pipeline easements.

The damage to heavy equipment in Buena Vista County alone was estimated at exceeding $2.5 million, while damage at a series of work sites elsewhere in Iowa after November 2016 was described as either undetermined or for lesser amounts.

Prior to November 2016, before the two women claimed to have begun their initiative, authorities said at least $3 million in damage was reported on the pipeline project from apparent arson incidents.

“Some may view these actions as violent, but be not mistaken,” Reznicek and Montoya said in a joint statement a year ago. “We acted from our hearts and never threatened human life nor personal property. What we did do was fight a private corporation that has run rampantly across our country seizing land and polluting our nation’s water supply.

“You may not agree with our tactics, but you can clearly see the necessity of them in light of the broken federal government and the corporations they protect.”

None of the sabotage claimed by the two women occurred after oil began flowing through the $3.8 billion Dakota Access Pipeline in June 2017.

The pipeline, which was developed by Dallas-based Energy Transfer Partners, begins in North Dakota’s Bakken oil fields and transports oil through South Dakota and Iowa to Patoka, Ill., for distribution to other points.

After the July 24, 2017, news conference, both Reznicek and Montoya were arrested by Iowa troopers because they damaged a state-owned sign outside the Iowa Utilities Board’s offices. But they faced only minor charges for the sign damage and were ordered to pay fines they still haven’t paid.

However, FBI agents raided the Catholic Worker House in Des Moines where they lived on Aug. 11, 2017, searching for evidence linking them to the pipeline sabotage.

‘They’ve moved on with their lives’

He said they have “dropped out” to destinations that they are not disclosing.

“They have basically moved on with their lives. They don’t want anybody to know where they are, and they are not telling me,” Cordaro said.

He added that he has been in contact with Reznicek, who works as a day laborer, but not with Montoya. However, he believes both remain committed to social justice issues, particularly the protection of the environment and their fight against oil.

“I am hoping to convey to you that after this long year they are not letting the FBI scare them, and they have decided to just work out their fears,” Cordaro said.

Why no charges yet? Theories abound

“What is it that Dakota Access is afraid will come out? Obviously, it could be pretty damaging,” Fallon said.

Vicki Granado, a spokesman for Energy Transfer Partners, said in an email that there is no truth to any assertions that her company has asked the U.S. Attorney’s Office in Des Moines not to pursue criminal charges against the two women.

“Beyond that, I will decline to comment as we don’t discuss issues related to current or pending legal matters,” she said.

Bill Quigley, a law professor at Loyola University New Orleans who is representing the two women at no cost, said it’s his understanding the federal investigation into his clients is ongoing.

“I only hope the federal authorities will look into all the violations by the pipeline owners and operators as seriously as they are looking at the actions of protestors and water protectors,” he said in an email.

Chad Carter, business agent and vice president of Operating Engineers, Local 234, in Des Moines, which had union workers assigned to the pipeline construction project, has another theory why prosecutors haven’t charged Reznicek and Montoya.

“There is probably not a lot of proof that they did it,” Carter said. He wonders if the two women were claiming responsibility for pipeline damage that was done by other people.

While Cordaro defends the two women, Fallon contends their acts of sabotage were “very misguided.”

“It didn’t accomplish anything significant in terms of stopping the pipeline,” said Fallon, a leader of protests against the Dakota Access project. “It alienated a lot of people who we need on our side. So while I respect and admire their passion, I don’t think it was a wise decision.”

Both Reznicek, a Des Moines native, and Montoya, who previously lived in Phoenix, are experienced political activists.

Reznicek became involved in political movements about seven years ago with Occupy Wall Street protests. Montoya came to Iowa in 2016 after becoming involved in pipeline protests at the Standing Rock tribe’s reservation in North Dakota.

Both were involved in the “Mississippi Stand” protest against the pipeline construction project, conducted along the Mississippi River in southeast Iowa.

The suit, which is still pending, seeks damages of not less than $1 billion. The defendants have rejected the claims, saying the litigation was intended to silence free speech through expensive, time-consuming litigation.