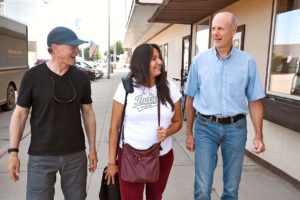 David Thoreson, Christine Nobiss and Ed Fallon take a few moments for a quick stroll and laugh on Inwood’s Main Street. They were in N’West Iowa on Tuesday, gathering information about the Doon oil spill.

DOON—There are no protesters, but that does not mean people do not care about the oil spill near Doon.

Three Iowa environmental advocates — Bold Iowa members Ed Fallon and Christine Nobiss of Des Moines and David Thoreson of the Iowa Great Lakes — traveled to Doon and Rock Rapids on Tuesday to inquire about and investigate the June 22 BNSF Railway derailment, which resulted in 160,000 gallons of oil spilled into the Little Rock River.

“This is a big spill; it’s not a little thing to the people of Doon and the folks downstream,” Thoreson said. “We are hoping quality monitoring is done for a period of time.”

“We are the first statewide advocacy group to be here,” Fallon said. “There are a lot of important pieces that are missing.”

The three came to Lyon County to converse with county and state officials about their concerns.

“Hats off to the local law enforcement,” Fallon said. “They did everything they were supposed to do to address this immediate problem. It remains to be seen on how good the DNR does.”

Nobiss said the Iowa Department of Natural Resources and the U.S. Environmental Protection Agency were in the dark about a variety of information as the agencies were primarily concerned with the spill itself. However, she did say that she was happy that the spill has been contained to a small area.

The advocates spoke frequently about the 2010 Kalamazoo River oil spill in Michigan, the largest inland oil spill in the country’s history in which a million gallons of crude was spilled from an Enbridge Energy pipeline. The oil came from the Alberta tar sands in Canada. The crude oil transported by BNSF that spilled into the Little Rock also came from the Alberta tar sands, and was a product of ConocoPhillips.

Thoreson said the estimated cost of the Kalamazoo cleanup was a little more than $5 million, but progressed to $1.4 billion. Nobiss said the rate of cancer in the area affected by the Kalamazoo spill has been significant, and that the health of people in the Doon area is a concern for her.

“There will never be minimal impact with an oil spill,” she said. “You can’t clean up an oil spill. At this point, it is part of the environment. It is going to take a long time to be absorbed, and there will always be some left behind. The waterway is contaminated no matter what.”

Fallon said they are trying to get people together who are familiar with the Kalamazoo spill to conduct studies on the impacted health of the people and environment, and on the contaminants left behind in the water and on land.

“It is hard to imagine they can truly restore the farm ground and the stream beds,” he said.

Knowing the chemical makeup of the Doon crude oil, also known as diluted bitumen, might help guess what sort of effects the spill will have, Nobiss said. Based on the transported oil coming from the same location, they said some of the same results might show up near Doon.

Crude oil typically contains benzene, a chemical compound classified by the EPA as a known human carcinogen. Oil is not the only product containing benzene. It can be used to make plastic, adhesive, pesticide and rubber and is found organically in naturally-occurring events such as volcanic eruptions and wildfires.

Daren Beaudo, director of media relations for ConocoPhillips, provided the chemical makeup of the crude oil spilled in the Little Rock River. It is referred to as Surmont Mix A, and benzene is present in the mixture.

“The big question is, ‘How do we move beyond oil?’” Fallon said. “How do we make sure this spill and subsequent spills have little impact on landowners, farmers and taxpayers?”

Something Fallon, Nobiss and Thoreson stressed is they are not looking to create a protest in response to the Doon oil spill. Unlike what happened in North Dakota on the Standing Rock Sioux Tribe Reservation in 2016 regarding the Dakota Access Pipeline and what is building in Minnesota in response to the replacement of the Line 3 crude oil pipeline by Enbridge, Nobiss said this is not something people would ordinarily protest.

“We don’t go into a community already devastated,” she said. “The idea is to get people to work with the nonprofits. It most cases, work is done behind the scenes, investigating. That is how we advocate. We have no intention to protest or to make Doon and local officials look bad. We want to make sure the area is safe and that BNSF is doing its job so whoever lives here can have a healthy environment and kids can grow up without worrying about possible health effects.”

Fallon said that while there would not be protests, it should be pointed out that protesting is a great American tradition, dating back to a time when colonists dumped tea into a harbor in Boston.

“It is still important people recognize the value of that tool,” he said.

The next move by Nobiss regarding the oil spill is to gather historical and archaeological reports to see if any Native American sits were impacted by the spill. Nobiss is a Plains Cree-Salteaux of the Gordon First Nation from Saskatchewan. She has lived in Iowa for 11 years and is the lead organizer and spokesperson for Seeding Sovereignty, a group of women seeking to end violence to women and to the planet.

“When something happens, there is no regard for what they are bulldozing,” she said. “They don’t know what they’re going in to. I’m getting statements from people whose ancestors lived on this land.”

Nobiss also wants to schedule a press conference with people who were affected by the Kalamazoo River oil spill and bring them to Doon for an educational seminar.

“It may be a smaller spill, but that does not matter,” she said. “It is significant enough to have long-term damage.”

The primary focus of Bold Iowa is to provide support for landowners affected by the Dakota Access Pipeline, which is present two miles south of the BNSF spill.

The fact that the Little Rock River was in the middle of flooding for the second time in four years is a sign of climate change, the advocates said. The crude oil from the Alberta tar sands in Canada spilling in to the water is a tragic side effect of what is happening worldwide. If the river had not been flooding, perhaps the oil spill might not have happened, they said.

“Climate change is taking threats and making them worse,” Thoreson said. “It creates uncertainty and unpredictability.”

Climate change is something that Thoreson, Fallon and Nobiss would not like to be politicized and divisive. Thoreson said Iowa farmers already know something is happening due to the erratic weather and higher precipitation.

“You can call it whatever you want, but the science is clear and there is more water vapor in our atmosphere,” Thoreson said. “Because of the extreme rainfall, there are some things farmers can’t do. The conversation is going on. This is not a political issue. This is a human issue. It is affecting everyone.”