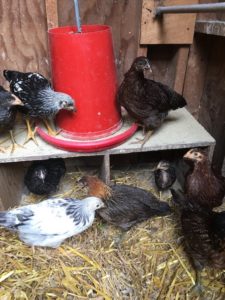 I’m so excited about my new flock of chickens! Over the past two months, they’ve made solid progress toward becoming fully enrolled members of the Des Moines Society of Colorful Egg Layers. Like an overly protective parent, I worry about them when I leave town. But fortunately, I have two wonderful friends, Emily and Johanna, who mind them in my absence. (Emily, Johanna, in terms of chicken sitters, you’re the best!)

On the other end of the chicken-sitter spectrum is Mr. Fox. If my only option were to put Mr. Fox in charge of the coop, I’d come home to an empty nest.

Yeah, yeah, the fox-watching-the-henhouse metaphor has been squeezed to death — but it’s really the best way to describe former Gov. Branstad’s appointment of Richard Lozier to the Iowa Utilities Board (IUB).

Lozier’s connection to Energy Transfer Partners (ETP) as the attorney for the MAIN Coalition tags him as Branstad’s fox sent to guard Iowa’s land, water and property rights. Lozier’s bias is so transparent that Branstad never should have appointed him.

Gov. Reynolds needs to do the right thing and remove Lozier from the IUB. The Iowa Code speaks strongly to this type of conflict, citing “gross partiality” in Chapter 66.26(3) as grounds for deposing someone like Lozier.

Earlier this summer, Indigenous Iowa and Bold Iowa began circulating a petition calling on Gov. Reynolds and the Executive Council of Iowa to remove Lozier from the IUB. Please take a minute to sign the petition and circulate it to your contacts.

Next Friday, September 8 at 11:00 a.m, Bold Iowa and its partners will deliver the petition to Gov. Reynolds, as part of the National Day of Action to Stop Energy Transfer Partners. We’ll meet on the west steps of the State Capitol for a brief rally, then head inside. I’ve got a call in to Gov. Reynolds’ scheduler, and will keep you posted about that and other developments on our Facebook invite.

Thanks to our partners in this effort, including Indigenous Iowa and Iowa Citizens for Community Improvement. We hope to see you next Friday. Thanks!