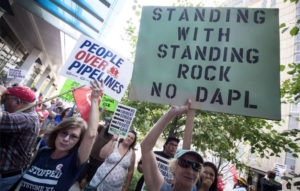 The Sierra Club is one of several environmental groups named in a lawsuit filed Tuesday by Energy Transfer Partners, the firm that developed the Dakota Access pipeline that crosses Iowa.

However, while the club is listed as part of an alleged “criminal enterprise” ETP says worked against it, it’s not named as a defendant in the suit.

“Sierra Club is not named as a party defendant, just as a ‘co-conspirator,’ I guess,” Wally Taylor, attorney for the Iowa Sierra Club, said Tuesday.

“The Iowa Sierra Club certainly had no connection with any other groups, in terms of what the lawsuit talks about. It looks to me like they’re talking about the national Sierra Club,” Taylor said.

“I don’t think any of those allegations have any merit,” Taylor added. “I think this is what they call a SLAPP suit. That stands for Strategic Litigation Against Public Participation. In other words, it’s used for intimidation.”

The Bold Alliance is also within the suit. Bold Iowa’s director, Ed Fallon, labeled it “a corporate witch hunt” and “a desperate, insidious effort to silence public opposition to the Dakota Access pipeline and other fossil-fuel expansion projects.”

The lawsuit alleges “a network of putative not-for-profits and rogue eco-terrorist groups” have been targeting legitimate companies with false claims, and other misconduct. ETP alleges a “criminal enterprise” made up of “legally distinct but associated-in-fact environmental organizations, individuals, and others who worked in concert with one another” carried out various illegal activities.

Sierra Club is named as one of these organizations, as is Bold Alliance, headquartered in Nebraska. Bold Iowa was formerly part of the national Bold Alliance and is now an independent non-profit organization.

ETP states that Bold “played a critical role in the Enterprise’s campaign against Plaintiffs by widely disseminating the Enterprise’s materially false, misleading, and defamatory disinformation” in order to generate outrage and incite protests against the pipeline.

Reznicek and Montoya were arrested in July, and said they had burned construction machinery, cut through pipe valves with a torch and set fires with gasoline, rags and tires along the Dakota Access pipeline route.

Taylor noted that the lawsuit spends a lot of time talking about the environmental groups’ campaign to get banks and other financial institutions to divest from the pipeline project.

“I’m wondering if maybe the banks were pulling out of the project,” Taylor said. “I’ve wondered all along how this project can be viable now that oil is under $50 a barrel.”

When the company began building the pipeline, oil cost more than $100 a barrel, he said.

“It’s encouraging to know that our efforts had a big impact,” continued Fallon. “At the same time, any American who values freedom of speech and the right to assemble should find it chilling that a huge corporation with seemingly bottomless pockets can use its clout to try to silence dissent through the courts.”

Fallon said in August 2016 ETP sued his group, along with Iowa CCI, and Fallon and CCI’s Adam Mason specifically, “to try to stop the two organizations from organizing peaceful protests and nonviolent civil disobedience.” That lawsuit was dismissed by district court in Polk County.

Taylor is representing Sierra Club in a lawsuit ongoing in Iowa against the pipeline company. The club joined with landowners challenging the Iowa Utility Board’s granting of the pipeline permit and the use of eminent domain.

The landowners appealed the decision after they lost their suit in March. Taylor said the appeal has no set date yet for a hearing, but added he wouldn’t expect a decision until early next year.