Yahoo! Lifestyle Excerpt: Ed Fallon, a commentator on Iowa politics who has been “bird-dogging” candidates — as he put it — for 32 years, thought Harris did well to talk about climate change. But he was not fully satisfied with what he heard. “Mentioning climate change and prioritizing it are two different things,” Fallon said. 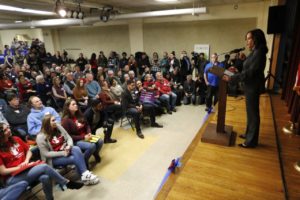 DES MOINES, Iowa — Kamala is here. The news spread quickly on Friday evening through the lobby of a downtown Des Moines hotel, where out-of-town progressives attending a political training and Iowans there for a construction-related gathering were having drinks. Heads turned, as toward a Hollywood star. Because a celebrity was in their midst, walking toward the elevator banks. The following morning, she was spotted in the hotel gym at around 6 a.m., reportedly working out on a stair machine. The exercise regimen, positively Obama-esque, was also the subject of much talk.

Kamala is, of course, Sen. Kamala Harris of California, the closest thing the Democratic presidential primary has to a frontrunner. Nor are the Obama similarities confined merely to an apparent attention to physical fitness. She is, like former President Barack Obama, biracial, the daughter of academics from India and Jamaica. Like him, she served for about two years in the U.S. Senate before declaring for the presidency. And her celebrity, like his, is such that many refer to her simply on a first-name basis.

A weekend swing through the Des Moines area — in preparation for next year’s Iowa caucuses, now a mere 11 months away — highlighted Harris’s strengths and weaknesses as a candidate. Comfortable in crowds, she is capable of soaring rhetoric, even if that rhetoric is perhaps not quite of the same caliber as that which Obama displayed in 2008. But in more intimate settings, she sometimes avoided specifics, leaving some Iowans unsatisfied.

Harris began her day at the Iowa state Capitol, in the small and ornate chamber reserved for the state’s supreme court. There, she took questions from members of the Asian and Latino Coalition, with whom she shared seats around an enormous wooden table, while others packed into surrounding seats.

“You’re in a very special room,” said the group’s communications director, Mitch Henry, noting that the previous day had marked 12 years since a junior senator from Illinois — Obama — campaigned there.

In response to a question about whether she was a “moderate,” Harris said she “rejects labels.” But at other times, she offered policy proposals that seemed more a continuation of the Obama administration than the radical break with neoliberalism favored by some progressives.

She said, for example, that she supported universal background checks for prospective gun buyers, as well as a restoration of the ban on assault weapons. She urged comprehensive immigration reform, taking a dig at President Trump and his signature campaign promise from 2016: “That wall ain’t gonna stop them,” she said of drug dealers and sex traffickers who cross the Mexico-U.S. border. She made another joking allusion to Trump when she said that she “would not conduct trade policy through tweets.”

Harris did say she supported “Medicare for all,” though she no longer believes that all private insurance should be eliminated. “They are gouging us,” she said of pharmaceutical companies. In another nod to the populism now ascendant in the Democratic Party, she said she wanted to repeal Trump’s tax cuts — an impossibility if Republicans maintain control of the Senate — and give families making less than $100,000 a year a monthly tax credit of $500.

Voters were clearly impressed by Harris, and dozens stayed behind to shake hands and take pictures with the 54-year-old senator. But some also expressed disappointment in her unwillingness to commit to concrete policy proposals.

“She didn’t really go into details,” said Maria Alcivar, a Democrat who had enthusiastically supported Sen. Bernie Sanders, I-Vt., in the 2016 primaries. “And I think we want to know the details,” in particular about immigration. Ed Fallon, a commentator on Iowa politics who has been “bird-dogging” candidates — as he put it — for 32 years, thought Harris did well to talk about climate change. But he was not fully satisfied with what he heard. “Mentioning climate change and prioritizing it are two different things,” Fallon said.

Harris’s predilection for avoiding specifics has been noted before. In January, Republican strategist Patrick Ruffini posted on Twitter a transcript of Harris speaking about the nation’s “noble ideals.” He added his own wry comment: “Kamala Harris is winning the primary for speaking in generalities.”

Later the same day, Harris held something much closer to a pure campaign rally, in a vast auditorium at a community college in Ankeny, a suburb of Des Moines. Some 760 people were in attendance. Here, too, Harris seemed to deliberately avoid specifics. She opened with remarks about the “need to restore truth and justice,” though what she meant was unclear. She sometimes reverted to platitudes, as when she discussed wanting to “invest in working families” and called for “investment in our public universities and colleges.”

Asked by one voter what set her apart from the dozen other Democrats now running for the presidency, she made reference to a “commitment to public service.”

At the same time, she appeared to be well-served by the format. Lighthearted and confident, she projected the frontrunner’s aura.

Attendees came away impressed, if not yet quite convinced.

“I agree with her on the content of everything she said,” said a woman who attended the rally with her teenage daughter. Indeed, Harris said nothing that would have upset mainstream Democrats of the kind that tend to live and vote in Iowa.

“What she said connected with the room full of Democrats,” said Kevin Heisler, who came to the rally with his wife. “The answers that she gave were great for the audience she had, including me.” But like a number of other potential voters who spoke to Yahoo News, Heisler said he was not ready to proclaim Harris his favorite, an understandable hesitation considering that the Iowa caucuses are to take place in early February 2020.

The verdict from Scott Syroka, a native of Iowa, was also effusive: “Great,” he said of Harris. “Really great.” But asked if she was his top choice, he demurred. “One of them,” he said, adding that the woman known to many simply as Kamala is “definitely up there.”