Colorado Politics Excerpt: As local Democrats hunted for room at long tables, Kathy Byrnes of Des Moines held a tray of food and asked Harris, a U.S. senator from California, “How are you going to deal with the proliferation of pipelines?” 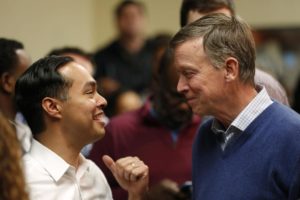 AMES, Iowa — Was it the black bean soup that drew them? If not, maybe the carrot ginger soup. Or was it the chance to mingle with not one, not two, but three Democratic presidential hopefuls in one spot?

And in the best tradition of early-voting Iowa — its caucuses remain the opening round of the presidential primary battle — voters and reporters flooded the downtown Ames church to surround White House wannabes Julian Castro, Kamala Harris and John Hickenlooper.

As local Democrats hunted for room at long tables, Kathy Byrnes of Des Moines held a tray of food and asked Harris, a U.S. senator from California, “How are you going to deal with the proliferation of pipelines?”

At one point Harris stopped by the bustling kitchen to thank those preparing the food — and look longingly at the desserts.

Not 10 feet away, Sarah Pearson of Milwaukee, Wisconsin, asked Castro, secretary of Housing and Urban Development in the Obama administration, if he would support decriminalizing sex work.

Nearby, Chelsea Chism-Vargas of Des Moines leaned in for a selfie with Hickenlooper and asked the former governor of Colorado his position on abortion rights.

9News politics reporter Marshall Zelinger reports that during Hickenlooper’s speech to the Iowa crowd, he garnered applause when he brought up Colorado passing limits on firearm magazine capacity in 2013. The state’s limit on magazines holding fewer than 15 bullets “resulted in two Democratic lawmakers getting recalled and one resigning before the recall could happen,” Zelinger notes.

While Hickenlooper has not yet formally declared his candidacy for president, he told the crowd that “I feel like it’s a calling,” the Ames Tribune reported.

“I’m a doer,” the newspaper quoted Hickenlooper as saying. “I have a long, consistent record of bringing people together to find that common ground and achieve progressive goals and then move on to the next event.”

He also decried partisan divisions in the country, but said the nation can find common ground on such issues as universal health care and mental health, the Tribune reported.

Hickenlooper addressed the seeming ticklish issue of both he and his longtime associate Bennet both being maybe-candidates in the 2020 race, Colorado Public Radio reports.

“I’m not going to try and point out where I’m better than he is, or where he’s not sufficient,” CPR quoted Hickenlooper as saying. “But we have different world views and different experiences. … We’re two distinct voices trying to make sense out of how do you bring this country back in the right direction, back together.”

With two dozen or more potential Democratic candidates forecast to seek the nomination — so far only 10 or so have taken at least a first step toward a bid — the yearlong political invasion of Iowa is just beginning.