“The number one thing: beating Trump. Number two: finding someone who can govern decently,” she said. “We could still get a yahoo Democrat.” 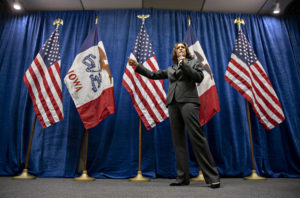 Senator Kamala Harris, a Democrat from California and 2020 presidential candidate, speaks during a campaign stop in Des Moines, Iowa, U.S., on Saturday, Feb. 23, 2019. Harris is one of six women running for the Democratic nomination to become the first female to hold the highest office in the nation. Photographer: Daniel Acker/Bloomberg via Getty Images

The deep desire among Democrats to beat President Donald Trump in 2020 is filling the chairs in Iowa homes and meeting halls as candidates parade through the state.

Even though the state’s first-in-the-nation caucuses won’t be held for another 11 months, large and energetic crowds more typical of much later in the campaign are turning out to take the measure of what probably will be the biggest field of Democratic presidential candidates in a generation. But among Iowans, there’s still no agreement on who would be best to take on the incumbent president.

Three of the Democrats have gotten approving mentions from voters and are consistently drawing voters out into the cold and snow: Senator Kamala Harris of California, who spent the entire weekend in the state and weathered the most recent winter storm, as well as Senator Cory Booker of New Jersey and Senator Elizabeth Warren of Massachusetts.

“We want someone who’s definitely gonna take Trump out,” said Naomi Mendez, a 42-year-old educator from Des Moines who views Harris and Warren as the two most electable among the at least dozen candidates so far. “I’m looking for that strong candidate that’s gonna make it to the end.”

The mobs of Democrats turning out so far this year are an extension of the wave of energy that powered the party’s pick-up of 40 Republican-held seats to seize the U.S. House majority in last November’s midterm congressional elections.

Lots of Iowans became politically active for the first time last year and are now looking to the White House campaign, said J. Ann Selzer, a longtime pollster in Iowa.

“They are activated, and they feel like they can change things,” she said. “It’s not like hoping for change. It’s making change.”

A Monmouth University poll released Feb. 4 showed 56 percent of registered Democrats and Democratic-leaning independents nationally prefer someone who would be a strong candidate against Trump, even if they disagree with that candidate on most issues. Just 33 percent said they would prefer a nominee who they’re aligned with on the issues even if that person would have a hard time beating Trump.

The candidate viewed as most likely to beat Trump, of course, is a moving target. Someone who looks like a winner now could easily stumble before the caucuses begin in early February 2020.

While Harris, Warren and Booker have gotten good early reviews from many Iowans, others say they’re attracted to senators Amy Klobuchar of Minnesota and Sherrod Brown of Ohio because their electoral history suggests an ability to win in both urban and rural America. Brown has visited Iowa and other early nominating states, but he hasn’t decided on making a bid.

During a stop at the state capitol on a windy, rainy Saturday, Harris urged Democrats to harness their anger and turn it into political change. She joked that she knows they’re “yelling at the TV,” “throwing things,” and engaging in “individual and group therapy.”

At a popular tavern that’s a fixture in Iowa City, dozens of people stood outside the room where Kirsten Gillibrand was speaking on a recent frigid night because they couldn’t force their way into a jam-packed venue where the junior senator from New York was standing.

On his first trip to the state as an official candidate earlier this month, Booker was greeted by enthusiastic crowds, including a standing-room-only event in Cedar Rapids on a Friday evening where attendees had to navigate an icy parking lot.

Crowd size isn’t a perfect metric. These are not arena-sized events, and the caucuses themselves are relatively low-turnout affairs. Campaigns have an easier time building them on their initial trips through the early nominating states than later in the year, after activists have seen them in person already once or multiple times.

Former President Barack Obama, then the junior senator from Illinois, drew huge audiences on his first visits to Iowa as a declared candidate in February 2007. His campaign later sought to create more intimate events to try to showcase his ability to answer voter questions.

The depth and breadth of Democrats who want to take on Trump is illustrated on Anna Wittmuss’s iPhone. She already has selfie photos with 11 active and prospective presidential candidates. She has images with Harris, Warren, Booker and Klobuchar, as well as candidates who barely register in the polls or haven’t officially decided on joining the race. In the former category is South Bend Mayor Pete Buttigieg, former technology executive Andrew Yang, former Representative John Delaney and self-help author Marianne Williamson. In the latter group is Senator Michael Bennet of Colorado, Governor Steve Bullock of Montana and former Colorado Governor John Hickenlooper.

“There are a lot more people at the events and a lot earlier,” said Wittmuss, a 57-year-old speech pathologist from West Des Moines. “People don’t want Trump, and they want to make an educated decision.”

Wittmuss, like many voters interviewed, said she’s happy to have the smorgasbord of choices.

Unlike the 2016 Democratic nomination race, this one is so wide open because the party establishment isn’t directing the race with money or endorsements. Some top Democrats, Obama in particular, have indicated they’re unlikely to weigh in anytime soon.

With so many competitors coming from the U.S. Senate, the deluge of candidate events has been especially heavy on weekends when Congress isn’t in session. Conveniently for the candidates, it’s also when it’s typically easiest to build a big crowd.

“It seems like Friday, Saturday and Sunday I’m seeing candidates,” said Luanne Pedrick, 63, a health care data analyst who, for now, is most interested in Harris and Booker. “I feel like we are so privileged here to be able to see all these people. I always want to give them a fair shot to have their say.”

Samantha Kuhn, an environmental advocate from Des Moines, said it’s “way too early” to know which Democrat she’ll support in the caucuses.

“The number one thing: beating Trump. Number two: finding someone who can govern decently,” she said. “We could still get a yahoo Democrat.”