The New York Times Excerpt: At a voter forum in Des Moines on Saturday, Ms. Harris said she did not want to be pegged in any fixed ideological category — a posture that can frustrate some progressive Democrats. “That was evasive,” said Ed Fallon, a liberal Iowa activist who attended the forum. “It’s clear that she wasn’t being clear.” 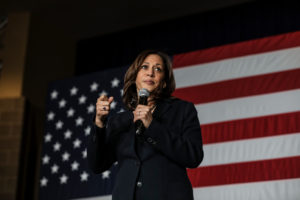 Senator Kamala Harris of California has had a strong start to her presidential bid, but on a range of issues she has not offered positions when asked, had to clarify her views and softened her previous comments. Credit Jordan Gale for The New York Times

ANKENY, Iowa — When Senator Kamala Harris came to Iowa last month shortly after entering the presidential race, she surprised some in her own party by breezily stating her support for a single-payer health care plan that would end private insurance.

“Let’s eliminate all of that,” Ms. Harris said during a prime-time town hall event on CNN. “Let’s move on.”

Her comments caused an immediate stir in the political world — and Republicans saw a chance to link her to a more extreme policy proposal than she perhaps intended. So when she returned to the state on Saturday, she had a much more precise answer ready when asked about universal health care.

“In my vision of ‘Medicare for all,’ there would be a phasing in of it, and there would still be the option to have private insurance for the purposes of supplemental coverage,” she told a voter in suburban Des Moines whose question had actually been about how best to finance a single-payer system.

Few other Democratic presidential hopefuls have enjoyed as splashy a start as Ms. Harris has: She drew 20,000 people to her formal campaign launch in Oakland, Calif.; raised $1.5 million in her first full day in the race; and has been talked about on social media more than any of her rivals, vaulting to the top tier of the rapidly growing field.

But the candidate is still catching up to the campaign — and not just on health care policy.

On issues ranging from breaking up big technology companies to the crisis in Venezuela to reparations for African-Americans — and even the allegations against the actor Jussie Smollett — Ms. Harris has not offered positions when asked, had to clarify her views and softened her previous comments.

It is hardly unusual for candidates to stumble or appear ill at ease at the outset of the grueling political crucible that is a presidential campaign; even former President Barack Obama, who is remembered as a political phenom, struggled at times in the early weeks of the 2008 campaign.

But the scrutiny has grown even more intense since that race, and the margin for error is minuscule in a field with so many candidates.

With the growth of political news outlets, the rise of social media, and the global interest surrounding President Trump and his re-election, high-profile candidates do not have the luxury of honing their stump speeches before a few dozen voters, and even fewer reporters, in a cozy Concord living room.

Instead, there have been hundreds of attendees at many of the early gatherings featuring the best-known candidates — as well as dozens of writers and photographers eager to capture every moment.

“There is no on-ramp today,” said Stephanie Cutter, a top aide in John Kerry’s 2004 presidential campaign. “It’s instantaneous, which means it is harder for the candidates to work out their positions or decide their positions.”

In this environment, it is perhaps not surprising that Ms. Harris’s first response on private health care echoed as loudly as it did. It was not just because of the implications for the nearly 60 percent of Americans who receive employer-based insurance — it was also because she made her remarks on live national television.

Past campaigns did not feature made-for-cable-TV town halls more than a year before the first primary.

Yet health care is not the only issue Ms. Harris, who was elected in 2016 to represent California in the Senate, has handled with uncertainty since she entered the race.

Asked Saturday morning about the growing tensions in Venezuela, and specifically how to get aid into the country and whether America should consider using force there, she offered a brief answer with few particulars.

“We need to take it very seriously,” Ms. Harris told reporters. “But I don’t know that at this point we need to, and I would not condone, military action at this point.”

Later that afternoon, though, she offered a more detailed response on Twitter about what she called “a crisis” stemming from President Nicolás Maduro’s rule.

“As President, I would immediately extend TPS status to Venezuelans,” she said, referring to temporary protected status for migrants. “It’s the right thing to do. America must show moral leadership in this hemisphere.”

On reparations, Ms. Harris said, “Yes, I am,” in a radio interview this month when she was asked if she was in favor of what her interviewer called “some type of reparations” for black Americans affected by slavery.

But when asked in another interview last week to be more specific, she highlighted her tax proposal for middle-class families, a more universal approach that is inconsistent with the definition of reparations.

“I’m not going to sit here and say I’m going to do something that’s only going to benefit black people,” Ms. Harris told theGrio, a news website focused on African-American issues.

In other instances, she appears uneasy committing to a policy at all, perhaps sensing a political hazard.

On Saturday, for example, an Iowan asked Ms. Harris if she would favor eliminating the filibuster if Democrats controlled both chambers of Congress and the presidency, to more easily push through the party’s agenda. The urgent necessity of doing so has become an article of faith to many on the left.

She initially joked that she wanted to change the subject, twice allowed that she was “conflicted” and did not offer a direct answer. “Sorry I can’t give you more than that right now,” she told the voter.

Similarly, when a reporter asked Ms. Harris last month on her first campaign trip to South Carolina about Senator Elizabeth Warren’s suggestion that technology giants like Amazon should be subject to antitrust laws, the California senator sidestepped the issue, which is a delicate matter in her state. “I don’t know enough about what she’s proposing, but I’m happy to follow up with you,” Ms. Harris said twice.

Her how-will-it-play hesitation is also frustrating to some more pragmatic Democrats who believe the candidates should not try to meet some imagined standard of ideological orthodoxy.

“They’re playing too assiduously to the critics of Twitter,” said Paul Begala, the longtime Democratic strategist. “And the truth is that doesn’t matter.”

Mr. Begala said party activists were overwhelmingly fixated on defeating Mr. Trump and were unlikely to penalize a candidate if they think he or she is up to that job.

“The scrutiny is far more harsh this time, but the voters are much more forgiving if they think you can win,” he said.

Yet her response to the Smollett case may only reinforce her instinct for caution.

Immediately after the actor, a gay African-American, said he had been attacked in Chicago by a pair of Trump supporters in what he described as a hate crime, Ms. Harris wrote on Twitter that the incident represented “an attempted modern day lynching.”

But after the Chicago police last week accused Mr. Smollett of staging the attack and charged him with filing a false police report, Ms. Harris was caught flat-footed. Reminded by a reporter that she had called the case a “modern day lynching,” she appeared to look back toward her aides before offering a halting answer.

“I think the facts are still unfolding,” she said. “I’m very concerned about obviously the initial allegation that he made about what might have happened.”

The good news for Ms. Harris and all the Democratic candidates, Ms. Cutter said, is that “it’s O.K. not to have a position today” on some issues.

“Voters just need to know you’re thinking about issues and are intellectually curious,” she said.

That kind of leeway, she said, will disappear in just over three months, when candidates gather for the first Democratic debate.

“When they have to stand onstage next to each other and debate each other, platitudes aren’t going to win the day,” said Ms. Cutter.