Last week, a Polk County District judge ruled against the Climate Defenders Five, finding us guilty of misdemeanor trespass in our protest against President Trump’s abject denial of climate science during the president’s visit to West Des Moines in June. 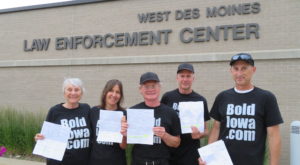 With all due respect, the Court completely failed to understand the growing urgency of the climate emergency, and thus the necessity justification of our defense. In saying that it recognized our “concern for the President’s policy on climate change,” the court got it wrong. The president has no policy on climate change. It’s his complete denial of the scientific proof of climate change that concerns us, not his nonexistent policy.

The Court also claimed that the “Defendant(s) did not present substantial evidence for the affirmative defense of justification in remaining on the Property.” Yet what could be greater cause for justification than an existential threat to our very survival?

The Court further stated that “Justification is an affirmative defense and can only be raised in situations that deal with harms or evils that are readily apparent and recognizable to reasonable persons. The defense is not permitted to justify acts taken to foreclose speculative and uncertain dangers, and is therefore limited in application to acts directed at the avoidance of harm that is reasonably certain to occur. Justification is based on a real emergency.” (emphasis added)

No! More than any other threat one could name, the climate crisis is a readily apparent harm and an evil recognizable to reasonable persons. Furthermore, the climate emergency is hardly “speculative” or “uncertain danger,” and the ensuing chaos caused by climate change is not just “reasonably certain to occur” — it’s already occurring!

The Court’s decision concludes with “Justification is based on a real emergency.” There is no emergency more real, more certain, more immanent than the climate emergency.

And in response to the prosecution’s insistence that we could have done something else that day to register our concern about climate change, there was absolutely no better place to be and no stronger statement to make. There is no single person on the planet who is more problematic in exacerbating the climate emergency than President Trump. Not only were we justified in being there, we had an obligation to be there.

So, yeah — my fellow defendants, Channing Dutton (our attorney), and I feel pretty strongly that the Court erred. Will we be filing an appeal? Hell yes! Stay tuned.