Dressed in black and wearing adult diapers, Bold Iowa supporters were arrested at a GOP rally and fundraiser for President Trump on June 11, 2019 while holding a sign reading, “Climate Denier in the White House scare the S#*T outta you? IT DOES US!”

DES MOINES, IOWA — The trial of the Iowa Climate Defenders Five (Todd Steichen, Martin Monroe, Miriam Kashia, Kathy Byrnes, and Ed Fallon) is scheduled to move forward on Tuesday, November 12 at 2:00 at the Polk County Justice Center, 222 5th Avenue, Des Moines, Iowa 50309. Before the trial at 1:30, the five will hold a press conference outside the building. 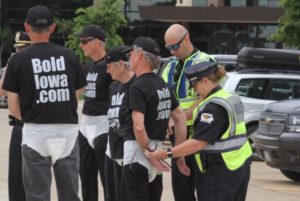 On June 11, 2019, President Trump visited Hy-Vee’s Ron Pearson Center in West Des Moines for a GOP rally and fundraiser. Thirty Bold Iowa supporters called out the president’s climate denial to him and attendees. Initially, protesters blocked one of the entrances to the facility’s parking lot. Later, five carrying a banner approached the building, hoping to enter and bring their urgent message to the attention of the president and the audience. At that point, they were arrested by West Des Moines police for simple misdemeanor trespass.

“Women’s right to vote. Civil rights. Stopping the Vietnam War. Environmental protections. The Women’s Movement. LGBTQ rights and marriage equality. These and so many other significant social justice shifts were accomplished because ordinary citizens were willing to take to the streets, and in many cases, willing to commit civil disobedience,” said Kashia. “History tells us that this is what has turned the tide.”

“We risked arrest because it’s urgent that we capture the attention of politicians, the press, and the public in this unprecedented moment where saving human life and the planet is on the line,” said Fallon. “We wanted to emphasize to those gathered at the rally and fundraiser that climate change threatens our very survival, and a president who denies the problem — whose policies in fact greatly exacerbate the threat — must be called out and challenged.”

Because of the worsening climate emergency, the Iowa Climate Defenders Five feel called to act in the interest of present and future generations and the planet. Similar cases across the country have seen judges responding more sympathetically to the climate necessity defense.