We’re assembling a squad of supporters to persistently “bird-dog” presidential candidates about Bold Iowa’s agenda. Voters have a right to know if candidates will:

— Support the Green New Deal and transition to a renewable-energy economy by 2030;

— Oppose the expansion of oil pipelines, fracking, and other destructive fossil-fuel projects;

— Stand with Indigenous communities to defend their sovereignty, land, and water; and

— Stop the abuse of eminent domain for private fossil-fuel companies.

I’ve bird-dogged presidential candidates since 1987. It works! Back then, a coalition of Iowa peace groups convinced five of six Democratic candidates to support a nuclear test ban and oppose the dangerous Trident missile system.

More recently, we witnessed the power of bird-dogging in the 2016 presidential election. In November of 2014, Charles Goldman and I asked Bernie Sanders where he stood on the Dakota Access Pipeline. Sanders hadn’t made up his mind. Over the next year, anti-DAPL Iowans bird-dogged him relentlessly. Not only did Sanders eventually come out against DAPL, he ran ads leading up to the Iowa Caucuses touting his opposition. 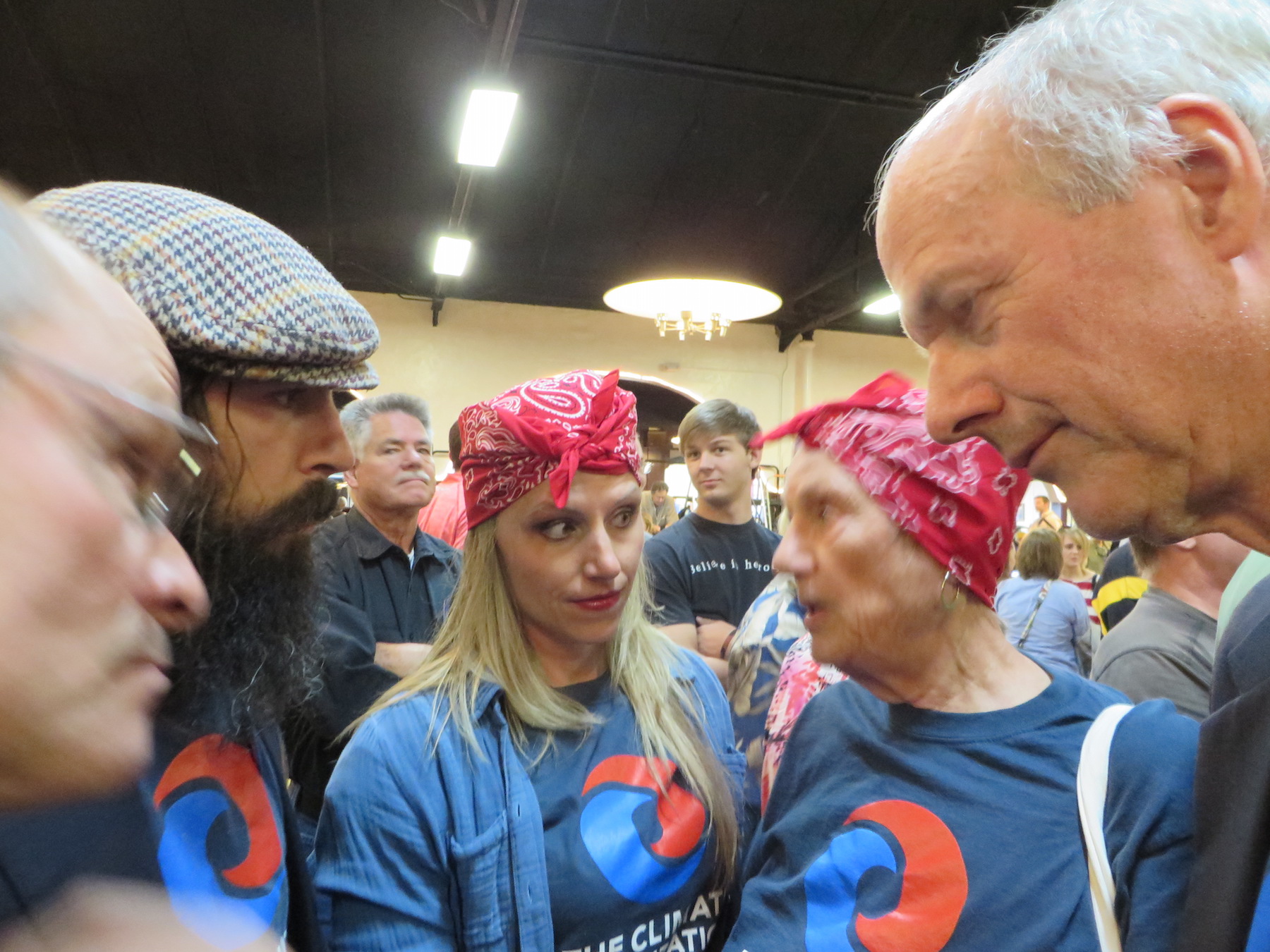 Trump supporters eye us as we plan a “Rosie the Riveter” action during our work with The Climate Mobilization in 2015. From left: Peter Clay, George McCloskey, Kristy Medo, Miriam Kashia, and Ed Fallon. (Not pictured: Barb Schlachter. Photo: Shari Hrdina)

Whether a candidate is a Democrat or a Republican, bird-dogging is effective. In 2015 at the State Fair, Shari Hrdina filmed my conversation with Mike Huckabee about DAPL and eminent domain. We had similar conversations with Rand Paul and Chris Christy and landed some excellent coverage.

Our most memorable bird-dogging experience in 2015 was when five of us got tossed from a Trump rally in Waterloo after challenging then-candidate Trump to promise to fight climate change.

The 2020 campaign is noteworthy because of the sheer volume of Democratic candidates running or likely to run for president. Iowans who understand the urgency of the climate crisis not only have an opportunity but an obligation to plug into the Caucuses and make our voices heard. There is probably no other forum where our bang-for-the-buck is greater.

So, tell me you’re ready to be a Climate Bird Dog. Tell me you’re ready to work with Bold Iowa supporters and our partners in other organizations to make sure every candidate for president hears from us at every stop they make. We’re offering workshop calls, too, so folks get up to speed on bird-dog style and content.

Polls show that Bold Iowa’s agenda resonates with a clear majority of Iowans. Let’s make sure the presidential candidates know that, too.