Saturday’s Climate Crisis Parade — challenging the media to cover climate — just keeps getting bigger. There are now seventy co-sponsors, and we’re expecting around a thousand participants! Indigenous communities will lead the parade, pulling a covered wagon symbolizing colonialism as one of the root causes of the climate crisis. 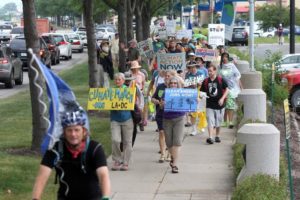 Other parade entries include:

— Animals threatened with extinction, including a waddle of penguins, a polar bear, and (for fun) a Big Foot (if we can find him);

— A mobile eco-performance by an ISU theatre troupe;

The Parade is a colorful and creative way to call attention to the deeply serious, existential threat of climate change. Please join us. Register to attend on Facebook or at Eventbrite.

One more thing: Send your local media contacts the following press release. Thanks, and hope to see you Saturday!

Record Number of Organizations to Participate in Des Moines Climate Action
Over 1,000 Expected to Call Upon the Press to Step Up Coverage of Climate Crisis

Seventy organizational sponsors will participate in the Climate Crisis Parade this Saturday, February 1, at 12:00 noon in Des Moines, Iowa, meeting at Cowles Commons at 4th and Locust and parading to the Iowa Events Center. This is a record number of sponsors for any Iowa action, at least since Iowans marched in solidarity with Martin Luther King, Jr. and the civil rights movement more than 50 years ago. Over 1,000 participants are expected.

In addition to raising public awareness of the rapidly emerging climate crisis, the parade’s “We challenge YOU!…” message will be directed at the hundreds of members of the world’s press assembled in Des Moines to cover next Monday’s caucuses.

Kathy Byrnes, one the event’s organizers, explains, “The press does a good job covering the consequences of climate change – increasingly catastrophic floods, droughts, fires, etc. – but too often fails to emphasize the scientifically established fact that these disasters are either directly caused or exacerbated by human-induced climate change.”

Parade participants will gather at noon at the northwest corner of Cowles Commons in Des Moines. Individuals and organizations interested in participating in the Climate Crisis Parade may visit the Facebook event via #ClimateCrisisParade, RSVP on Eventbrite, or call 858-356-2724.

Organizational members of the coalition as of today are: