Since June, Dakota Access has been pressuring the Iowa Utilities Board (IUB) to allow it to double the flow of oil through the Dakota Access Pipeline. To its credit, the IUB has refused to be pushed or rushed. In September, IUB members Geri Huser and Nick Wagner voted to require Dakota Access to file an amendment to its permit. 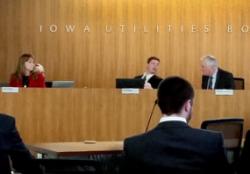 Iowa Utilities Board members Geri Huser, Nick Wagner, and Richard W. Lozier, Jr. Lozier has recused himself from DAPL regulatory matters, as he was formerly an attorney for a pro-pipeline lobby group. Photo from iub.iowa.gov.

Bold Iowa, the Iowa Chapter of the Sierra Club, and the Private Property Rights Coalition continue to monitor and write the IUB with concerns about the proposed expansion. We’re now waiting to see how the IUB responds to Dakota Access’ most recent communication.

Meanwhile in other states, Big Oil continues to push hard for legislation to punish peaceful, non-violent pipeline protesters. Last year’s fight at the Iowa Statehouse recently garnered some attention in Wisconsin, where our coalition with labor has not gone unnoticed.

The labor lobbyist I worked closely with last year, Tom Jochum, was quoted in the Wisconsin story, describing his response after the original bill was amended. “We still had problems with the way [the bill] was drafted because it could take legitimate civil disobedience, whether that’s a strike or a protest against something that we may even want, and turn that activity into a felony. We felt that the laws that we already had on sabotage and causing damage to any infrastructure, critical or not, were already addressed in the code, and this was just overkill.”

Last week, I spoke to bill drafters with Iowa’s non-partisan Legislative Services Agency — the folks who drafted the “critical infrastructure sabotage” bill that passed the Iowa House and Senate and was signed by Governor Reynolds. Drafters agree that, while Iowa’s law makes it a class B felony if one causes a substantial and widespread “interruption or impairment of a fundamental service” of gas, oil, petroleum, or refined petroleum products, it’s hard to imagine any judge or jury finding any of the protesters in the DAPL fight guilty of such a crime, with the exception of those who damaged pipeline equipment.

Building, nurturing, and maintaining coalitions is critically important for social and political change. Let’s remember that as we move forward on the next phase of the DAPL fight, which is stopping the proposed doubling of the flow of oil through Iowa’s farmland and across our rivers and streams.