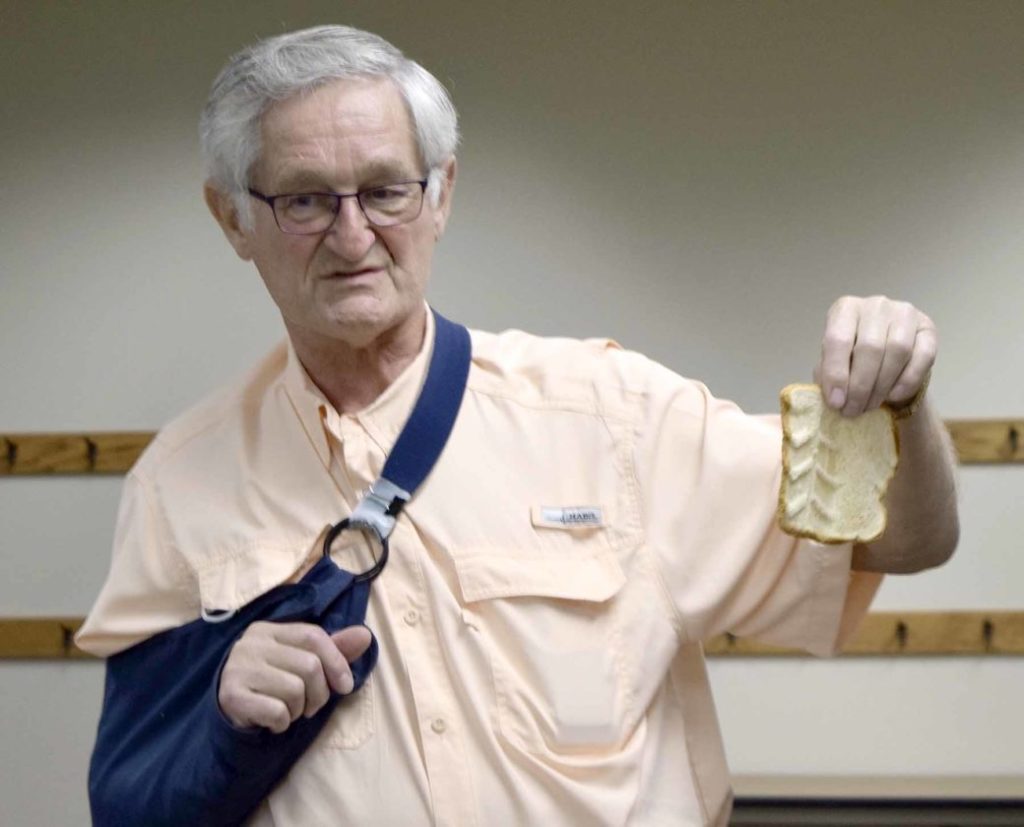 -Messenger photo by Joe Sutter
Keith Puntenney holds up a piece of bread after someone stepped on it, showing how the sponge-like air pockets have been crushed. Puntenney claims a strip of his land has been compacted and can’t be returned to how it was by construction of an oil pipeline that stretches across Iowa. Puntenney and other pipeline opponents spoke at the Fort Dodge Public Library Tuesday morning.

Landowners who tried unsuccessfully to keep an oil pipeline from being built through their land will get their day before the Iowa Supreme Court in September.

Nine landowners are named in the suit, and claim eminent domain shouldn’t have been used to take their land for use by the Texas-based Dakota Access LLC to build a pipeline from the Bakken oil fields in South Dakota to a processing hub in Patoka, Illinois.

Why is the case still moving forward after the work has already been completed and the pipe is already in the ground? Pipeline opponents hope the public will come out and ask.

Bold Iowa, an environmental group formed in 2016 to fight the Dakota Access Pipeline, will hold a march from Des Moines to Fort Dodge, starting Sept. 1 and ending on Sept. 8. 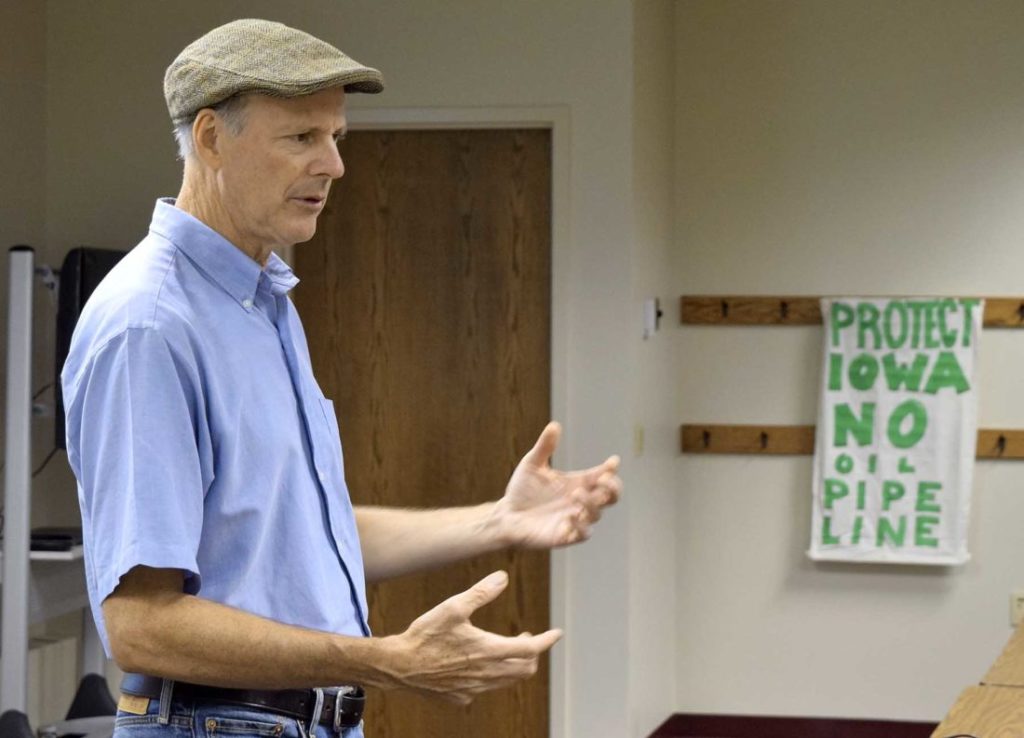 -Messenger photo by Joe Sutter
Ed Fallon speaks at the Fort Dodge Public Library Tuesday on a case by landowners against the Iowa Utilities Board, which will be heard by the Iowa Supreme Court on Sept. 15.

Keith Puntenney, of rural Harcourt, one of the landowners in the lawsuit, and Ed Fallon, an outspoken opponent of the pipeline and leader within Bold Iowa, held a forum at the Fort Dodge Public Library Tuesday to explain the suit and the march.

The purpose of the march is not only to show support for the landowners, but to reach out to others who have a different point of view, according to organizer Sarah Spain.

“This country is really divided, but we realize when we sit down and talk to each other that we’re not that divided,” Spain said. “Last year we did a march across parts of Iowa, and we really got to know people. They got to have conversations with us at the end of each day.

“We’d prepare food, they’d come to our camp. This was an amazing opportunity for a lot of preconceived ideas about who we are to be broken down.”

Fallon and Spain claimed falsehoods about their group were spread before that April 2017 march, leading to some chilly receptions in small-town Iowa.

“There was a film, that was put out by a group called TigerSwan ahead of our march, that said we were doing all these terrible things,” Spain said.

Fallon said the video went viral on social media and made the marchers look like “a bunch of crazies.” People thought the marchers would be burning flags, and getting onto people’s private property, none of which was true, he said.

“I’ve walked about 700 miles across Iowa,” Fallon said. “I’ve never been flipped off. I’ve never been buzzed. I never had a farmer yell at me. All that happened on that one day on the march because of this hateful video, that people saw and they believed.”

A 15-minute documentary called “Crossing the Divide” shows the marches’ perspective on this, and can be found online on Bold Iowa’s website.

Marchers will camp in Pilot Mound, Dayton and Otho, Fallon said. On Sept. 8 they’ll end at the City Square next to the Fort Dodge Library, where the band Brutal Republic will be performing. The event will be from 2 to 4 p.m., with food served.

The march is supported by Indigenous Iowa, Fallon said. Members of the Meskwaki Nation will be part of the march.

The lawsuit is important because of its impact on eminent domain law, Fallon and Puntenney said.

Puntenney also claims that landowners all along the route are now suffering from crop losses because the soil was compacted while crews worked to install the pipeline.

The suit claims the Iowa Utilities Board shouldn’t have granted eminent domain to Dakota Access.

The IUB won its case in Polk County District Court on Feb. 15, 2017, when a judge ruled that it had approved the pipeline correctly.

The Sierra Club is also part of the Supreme Court appeal.

The libertarian think-tank Niskanen Center has also entered arguments against this use of eminent domain.

The pipeline has been in operation for more than a year now.

What could still come from this appeal?

“First, we don’t want this to ever happen again. We think the law needs to be clarified,” he said. “Can anyone, for any commercial reason, come into Iowa and exploit the natural resources, quality of life of Iowa for their own private purposes?

“The second thing is there are still large questions out there about who pays for the damages,” he said. “In my own case, last year I lost 100 bushels an acre in that right of way. With farming at break-evens at best, and below break-evens, when you start taking even two acres or 10 acres out of somebody’s farm land, and it’s negative returns are in the hundreds if not thousands of dollars, you are raising all kinds of financial concerns, not only for them but for their banker.”

The actual production history of the farm also affects how much the land is worth, he said.