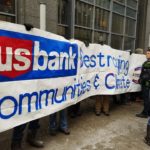 Link to original article: www.desmoinesregister.com/story/money/business/2018/02/01/iowa-environmentalists-heading-super-bowl-protest-dakota-access-pipeline/1087402001/ Coverage by The Des Moines Register, Des Moines, Iowa, February 1, 2018 Iowa environmentalists will flock to the site of Super Bowl LII this weekend to protest the Dakota Access pipeline. Bold Iowa director Ed Fallon said his group would join Indigenous Iowa and others from across the Midwest to protest the four-state pipeline ahead of Sunday’s Super Bowl LII game at U.S. Bank Stadium in Minneapolis. The activists are accusing U.S. Bank of financing the $3.8 billion pipeline project, which Continue reading → 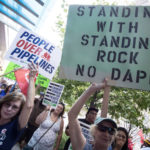 Link to original article: www.messengernews.net/news/local-news/2017/08/sierra-club-bold-vandals-all-named-in-etp-lawsuit/ Coverage by The Fort Dodge Messenger, Fort Dodge, Iowa, August 23, 2017 The Sierra Club is one of several environmental groups named in a lawsuit filed Tuesday by Energy Transfer Partners, the firm that developed the Dakota Access pipeline that crosses Iowa. However, while the club is listed as part of an alleged “criminal enterprise” ETP says worked against it, it’s not named as a defendant in the suit. “Sierra Club is not named as a party defendant, just as Continue reading →