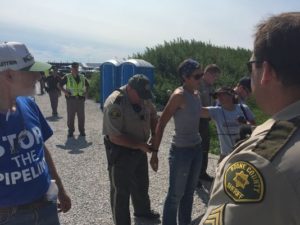 An international security firm targeted protesters opposed to the Dakota Access Pipeline with military-style counter-terrorism measures and closely collaborated with law enforcement authorities in five states, including Iowa, according to a report published Saturday by a non-profit watchdog journalism organization.

The Intercept, a publication of First Look Media, reported that TigerSwan, founded by retired members of the U.S. military’s Delta Force unit, was employed by Energy Transfer Partners, the parent company to Dakota Access.

“While we can expect to see the continued spread of the anti-DAPL diaspora … aggressive intelligence preparation of the battlefield and active coordination between intelligence and security elements are now a proven method of defeating pipeline insurgencies,” according to internal TigerSwan communications, the report said.

“More than 100 internal documents leaked to The Intercept by a TigerSwan contractor, as well as a set of over 1,000 documents obtained via public records requests, reveal that TigerSwan spearheaded a multifaceted private security operation characterized by sweeping and invasive surveillance of protesters,” the report said.

The $3.8 billion Dakota Access Pipeline extends 1,172 miles from North Dakota’s Bakken oil fields through South Dakota and Iowa to a distribution hub at Patoka, Ill. Thousands of people gathered last year near Cannon Ball, N.D., to protest the construction of the pipeline near the Standing Rock Sioux Reservation. In Iowa, hundreds of people participated in protests in Des Moines and in some of the 18 counties where the pipeline has been constructed.

Some pipeline opponents have fought the project on environmental grounds, citing concerns about oil leaks damaging water supplies and the use of fossil fuels contributing to global warming. Native Americans have expressed worries about disruption of sacred sites of historic and cultural significance, while many farmers and other landowners have objected to the use of eminent domain to obtain easements.

The Intercept says it is dedicated to “fearless, adversarial journalism.” The funding to launch The Intercept was provided by eBay founder and philanthropist Pierre Omidyar.

The leaked documents include situation reports prepared by TigerSwan operatives in North Dakota, South Dakota, Iowa, Illinois and Texas between September 2016 and May 2017, and delivered to Energy Transfer Partners, the report said.

“They offer a daily snapshot of the security firm’s activities, including detailed summaries of the previous day’s surveillance targeting pipeline opponents, intelligence on upcoming protests, and information harvested from social media. The documents also provide extensive evidence of aerial surveillance and radio eavesdropping, as well as infiltration of camps and activist circles,” according to The Intercept.

David Goodner, an Iowa activist who helped to plan anti-pipeline protests in southeast Iowa’s Lee County last fall, told The Register Saturday he believes The Intercept’s report is the tip of the iceberg.

Officials with TigerSwan,  the Iowa Department of Public Safety and the Iowa Attorney General’s office didn’t  respond Saturday to requests for comment on The Intercept’s report.

Vicki Granado, a spokeswoman for Energy Transfer Partners, issued a statement on Sunday:  “The safety of our employees and the communities in which we live and work is our top priority. In order to ensure that we do have security plans in place and we do communicate with law enforcement agencies as appropriate. Beyond that we do not discuss details of our security effort,” Granado said.

The Intercept’s report said documents described a meeting between TigerSwan and the Des Moines field office of the FBI, with the Omaha and Sioux Falls offices joining by conference call. Also in attendance were representatives of the Joint Terrorism Task Force, Department of Homeland Security, Iowa Department of Emergency Services, Iowa Department of Homeland Security and other state officials. Topics covered included the current threat assessment of the pipeline, the layout of current security assets and persons of interest.

The story also said that situation reports described TigerSwan’s frustration with the amount of leeway some law enforcement officials gave protesters in Iowa and the company’s efforts to persuade officers to use more punitive tactics.

“We need to work closer with Calhoun, Boone, and Webster county [law enforcement] to ensure future protestors will at least be fined, if not arrested,” an analyst wrote. “Alternatively, we could request Lee County LE speak to other counties about tactics that are working.”

Ed Fallon, a former Iowa legislator who has strongly opposed the Dakota Access Pipeline as a leader of Bold Iowa, said Saturday he helped to organize so-called BAT teams, an acronym for Bold Action Teams, that used guerrilla-style protest tactics to roam through areas of the Iowa pipeline construction project in an effort to impede workers.

“One thing this shows is how effective our protests have been at slowing down and calling out problems with the pipeline. Energy Transfer went to great expense to hire a militarized security force to monitor our actions,” Fallon said.

Adam Mason, state policy director for Iowa Citizens for Community Improvement, said The Intercept report confirms his belief that “big business and big ag” are pulling the levers of government in Iowa.

“This is the perfect example where you see law enforcement and public safety officials working together for big corporations to the detriment of everyday people,” Mason said.

Former Iowa Gov. Terry Branstad said last August he was authorizing the Iowa State Patrol to make arrests and ensure that construction of the Dakota Access Pipeline proceeded if protesters followed through on pledges to engage in civil disobedience in a bid to stop the project.

“The Utilities Board has made its decision, and I think it important that people respect and recognize that they were very thoughtful and had a deliberative process,” Branstad said. “It went on for a long time, but the decision has been made, and it should be abided by.”