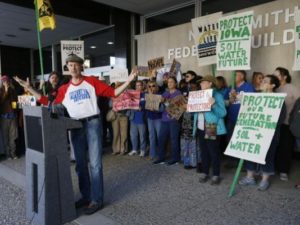 Tuesday, the Iowa Supreme Court sided with nine landowners and the Sierra Club Iowa Chapter, by rejecting Dakota Access’ request to have the landowners’ lawsuit dismissed.

The court’s order reads: “Dakota Access contends this appeal should be dismissed because the appellant, Sierra Club Iowa Chapter, has failed to establish proper standing in this matter and the remaining appellants’ claims are moot. Upon consideration, the motion to dismiss is denied. Dakota Access may raise the issues regarding standing and mootness in its appellate brief.”

This is a really big deal. It means the case against the Iowa Utilities Board and Dakota Access will move forward, with a schedule for court filings being established and a trial likely later this year.

The court’s order revealed another important development. Richard W. Lozier, Jr. requested permission to withdraw as counsel for the MAIN Coalition — a front group for Dakota Access. The court rightfully granted that request. What’s incredible is that Gov. Terry Branstad recently appointed Lozier to the IUB, filling the seat vacated by Libby Jacobs, despite this clear conflict of interest.

If Branstad wanted to inflame pipeline opponents and encourage further criticism of the rampant corruption within his administration, putting Lozier on the Iowa Utilities Board was the perfect way to do it.

Now the burden of defending this appointment falls to Lt. Gov. Kim Reynolds. It will be interesting to see how Reynolds responds. If she kowtows to Big Oil and keeps Lozier on the IUB don’t be surprised if her Republican opponent(s) make hay with it leading up to next June’s gubernatorial primary.