Climate change was mentioned, although briefly, in the mainstream media because individuals spoke up. Our ‘Climate is a Crisis’ sign was shown. Because someone asked a climate question, this was in the transcript: “But he did lay out elements of his plan to solve climate change and gun violence when asked.” 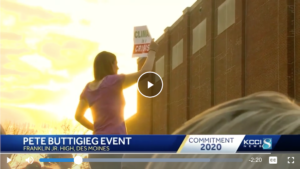 Show transcript:
Mayor of South Bend Indiana has gone from a virtual unknown – to polling near the top of the Democratic presidential field. Pete Buttigieg was campaigning tonight in Des Moines. KCCI’s Chris Gothner is live in the Beaverdale neighborhood – where Mayor Pete spoke to a big crowd. Yeah this wrapped up just about hours ago here at the old Franklin Junior High School. Originally this was going to be an indoor event. Well it had to be moved outside because of the crowd. A very big crowd for this type of an event — the campaign estimates about 1650 people were here. Buttgieg has made a lot of his personal here. Buttgieg has made a lot of his personal story and background — an here. Buttgieg has made a lot of his personal story and background — and has spoken a lot about more abstract ideas…for instance, he said the party can’t just win an election, it has to win an era. That’s the term he used tonight. But he did lay out elements of his plan to solve climate change and gun violence when asked. His pitch to Democratic voters is that he’s the candidate best equipped to articulate the party’s values to voters come 20-20. <52;48 “MY ANSWER TO THE ANGUISHED CRY OF THE COMMENTARIAT THAT DEMOCRATS CAN’T PUT WHAT WE BELIEVE IN INTO A BUMPER STICKER. OUTCUE: THAT’S OUR BUMPER STICKER”.53;01> We talked to some prospective caucus-goers before tonight’s rally. There are some people still deciding who among the massive field of Democratic candidates they’ll support. But some — already — have gone all in on the South Bend mayor. Here’s what Democrats we talked to say they like about Buttigieg. <24;24 HE’S OBVS V SMART THOUGHTFUL PERSON AND I THINK INTELLIGENCE TO LISTEN. 24;33> <29;42 I THINK HE’S A NICE MOTR HE’S GOING TO UNITE PEOPLE RATHER THE CONTINUE TO SEPARATE. 29;47> <34;39 I TIHNK IT’S A PLUS THAT HE’S AS YOUNG AS HE IS BC I DON’T WANT PPL MY AGE MAKING DECISIONS ON WHAT THIS COUNTRY’S GOING TO LOOK LIKE 50 YRS FROM NOW. 34;48> Buttigieg — who is gay — was greeted with two protestors today who yelled “Sodom & Gomorrah” when he talked about his husband. The protestors were quickly drowned out — and escorted out. He will remain in Central Iowa tomorrow, heading to Marshalltown and coming back here to Des Moines. Live in the Beaverdale neighborhood Chris Gothner KCCI 8 News Iowa’s News Leader.