Many steps. One journey.
To raise awareness, First Nation walkers traveled eight days on foot to get to their destination, Fort Dodge 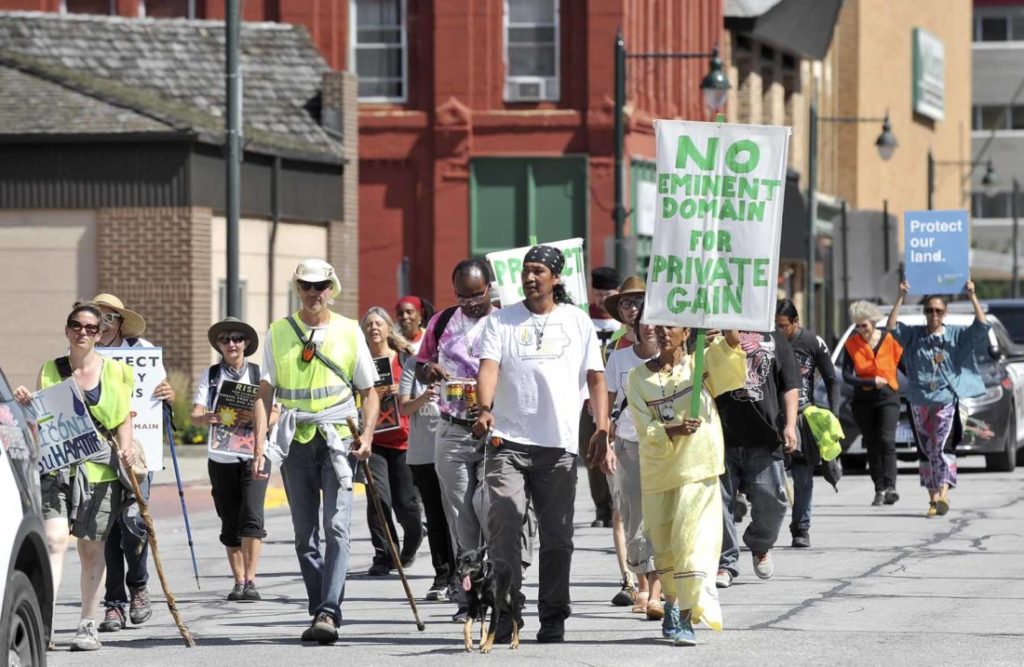 -Messenger photo by Hans Madsen
Participants in the First Nation Farmer Climate Unity March arrive in downtown Fort Dodge Saturday afternoon for a Celebration of March rally. They’ve been on the road for over a week. The march started in Des Moines.

Jeff Kisling, of Indianola, didn’t count the exact number of steps he took during the First Nation Farmer Climate Unity March on the 94 miles between Des Moines and downtown Fort Dodge.

Instead, Saturday found him sitting on a bench in front of the Fort Dodge Public Library during the Celebration of March picking rocks out of the worn treads of his shoes and checking on a blister pad attached with duct tape.

“I wore out my first pair,” he said. “They were my running shoes. This is my backup pair.”

The march, which is intended to draw attention to environmental issues and, particularly, the legal case against the Dakota Access Pipeline, is also a vehicle for unity.

Kisling, a Quaker, enjoyed learning about the Native American beliefs of his fellow marchers. He said they found more similarities than differences.

Matthew Lone Bear, of Newtown, North Dakota, was involved in the protest actions at Standing Rock.

“I got to meet a lot of great people,” he said.

He believes the message of the march can ripple out.

“I hope that they pay attention,” he said. “That people make a stand.”

Most of the marchers have two concerns about DAPL: the risk to the environment and abuse of eminent domain laws.

Donnielle Wanatee, of Iowa’s Meskwaki Indian Settlement, is among those.

“This is a slippery slope,” she said. “They came for us at Standing Rock. They’ll come for everybody if we don’t band together. We’re more aware of land being taken away. Now it’s happening to other peoples. You have to stand together.”

Miriam Kashia, of North Liberty, is no stranger to a long walk.

“When I walked across America it was seven million steps,” she said.

While Kashia is very concerned about the eminent domain issue, she’s primarily concerned with the environmental issues both the pipeline and the much bigger picture that she said it represents.

“Eminent domain,” she said. “That’s all-important. But I’m a global citizen. For me, my heart breaks when I think about an earth without elephants or polar bears. Two hundred species go extinct every day. We’re on that list. If we’re to survive, we have to survive together.”

She has one more simple message: “Protect our water. For all the species and the world.”

Among the activities Saturday afternoon during the rally in Fort Dodge was the singing of a song.

It was performed by Lakasha Yooxot Likipt, of the Cayuse-Nez Perz Nations, and Akicita Hoksida, government representative for the Sioux Nation of Indians. They sang in their native tongue to a native drum beat. It’s called “Mni Wiconi Song.” Here is the English translation of the lyrics:

“The water is sacred”

“The water that gives life is sacred”

“The Nation needs to take heart and be brave.”

Ed Fallon calls himself the agitator-in-chief for BOLD Iowa, the group that helped organize the march.

“We have one hour before the Iowa Supreme Court,” he said. “Hopefully, oil will stop flowing through this pipeline.”

Fallon urged everyone to continue the fight.

“I think we can get this problem back on the right track.”