We’ve got a quick update for you this week on some important developments. Please read and share. 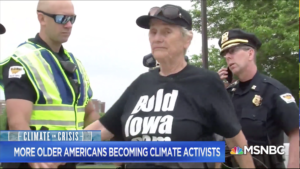 CLIMATE JUSTIFICATION TRIAL. For the fourth time, the trial of the Climate Defenders Five has been postponed. (Read the press release here.) Attorney Channing Dutton has done yeoman’s work compiling evidence justifying our action on June 11, when we led a protest against President Trump’s dangerous climate denial at a GOP fundraiser. Our trial is now scheduled for 1:00 on November 12 at the Polk County Justice Center.

DAKOTA ACCESS PIPELINE (DAPL). The forces of climate sanity and rural justice continue to push back against the pipeline company’s insistence that it should be allowed to double the flow of oil across Iowa. Wally Taylor, attorney for the Iowa Sierra Club, today filed a compelling brief with the Iowa Utilities Board (IUB) laying out the case against DAPL.

That nails it. Chapter 479B.1 was added to the Iowa Code in 1995, in part to clarify the state’s authority regarding oil pipelines. I checked the record, and I was one of 97 House members to vote in favor of the bill (HF 303) that enacted that statute. In other words, there was unanimous support for language that makes it clear that the IUB has the authority to require DAPL to file an amendment to its permit.

Wally also shared testimony by Richard Kuprewicz before the Illinois Commerce Commission, which must also approve DAPL’s request. Wally writes, “Mr. Kuprewicz provides extensive detail as to the increased risk from increasing the volume of oil through the pipeline. He also describes the inadequacy of federal regulation and oil spill response.” These are cautionary words we hope the IUB takes very seriously as it continues its deliberations. 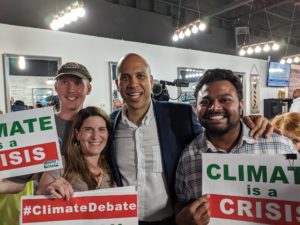 CLIMATE BIRD DOGS. The flood of presidential candidates across Iowa continues. While most talk sense on the urgency of climate action, we must continue to probe and push for two reasons: (1) to discern which candidates are sincere about their commitment to declaring a climate emergency and which are just stringing us along; and (2) to get the media to focus coverage on climate as a crisis, not merely another issue. To date, the mainstream media has been, for the most part, embarrassingly negligent in its duty to inform the public about the severity of the climate threat.

Thanks to the many Iowans who have stepped forward to bird-dog candidates. The presidential campaign has been a long slog, but let’s not back off. We need to keep pushing through the February 3 caucuses. Special thanks to Samantha Kuhn, who has been to so many events that some presidential candidates greet her by name.

A view of the Iowa House

Thanks to labor and environmental groups working together, Iowa’s law is no where near as punitive and anti-First Amendment as bills passed or proposed in other states. The key clause in Iowa’s law definines critical infrastructure sabotage as “an unauthorized and overt act intended to cause and having the means to cause, and in substantial furtherance of causing, a substantial and widespread interruption or impairment of a fundamental service rendered by the critical infrastructure.”

While it might take a court case to clarify what level of protest or civil disobedience constitutes “substantial and widespread interruption or impairment” to a pipeline, it is highly unlikely that any of the opposition organized against the construction of DAPL in Iowa in 2016 and 2017 constituted “substantial and widespread.” With the exception of …

JESSICA AND RUBY, who go to trial for multiple acts of arson and vandalism that destroyed DAPL property and delayed construction of the pipeline. (Read the story in The Intercept.) Regardless of whether you support or oppose Jessica and Ruby’s actions, it’s impossible not to admire their courage, commitment, and passion for justice. Currently, their initial court appearance is scheduled for December 2 in Des Moines.

Thanks for reading. Onward!