Bold Iowa was well represented today at a meeting at Senator Grassley’s office. In the fight against the Dakota Access Pipeline (DAPL), Native communities have been hit particularly hard, both in terms of DAPL’s impact on land, water, and climate, and because of the great harm caused by predatory “man camps” that spring up along construction and extraction sites. 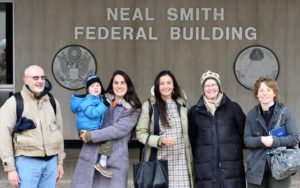 At the Federal Building in Des Moines, Native and non-Native people met with Grassley’s State Director, Carol Olsen, and two of the Senator’s Washington, DC staff. Participants discussed two pieces of legislation before the US Congress. The SURVIVE Act proposes that a percentage of funds allocated to the Victims of Crime Act go to Native communities. Years ago, Senator Grassley was involved in the passage of the Victims of Crime Act, so we take that as a positive indication of his interest in the SURVIVE Act.

The other bill, Savanna’s Act, would grant tribal police jurisdiction over non-Native people on Native land. It would also give tribal authorities access to criminal databases and expand the collection of crime statistics. This would help curb abuses by workers associated with extraction industry man camps specifically and other unwelcome non-Native visitors generally.

Jeff Kisling and Christine Nobiss helped set up the meeting. Jeff writes, “This meeting sprung out of the First Nation – Farmer Climate Unity March, where forty Native and non-Native people walked 94 miles from Des Moines to Fort Dodge. We followed the route of the pipeline and discussed the importance of the landowner/Sierra Club lawsuit against the abuse of eminent domain to build DAPL. One thing that came out of the March was a commitment among Native and non-Native marchers to work together on areas of common interest.”

Meeting participants represented Bold Iowa, Indigenous Iowa, Seeding Sovereignty, and Friends Committee on National Legislative (FCNL) — a national organization associated with the Quakers. FCNL works to build better relationships between concerned citizens and members of Congress. Native American affairs have been a key area of concern for FCNL since the 1950s.

Jeff noted, “Now the Senator’s staff has been introduced to us. We’ve laid the groundwork to begin to work together. We all need to be involved and supportive, though it’s crucial that Native people lead these discussions.”