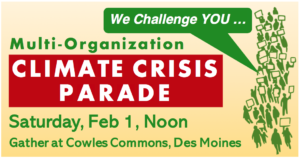 When forty organizations come together to take collective climate action, what happens? The Climate Crisis Parade! This multi-faceted action is scheduled for 12:00 noon on Saturday, February 1st — the Saturday before the Iowa Caucuses. If you’re associated with an organization, church, student group, etc, and would like to be involved, please email the Steering Committee at [email protected].

Here’s the press release that went out this week announcing the Climate Crisis Parade, and here’s a link to the Facebook event. Get it on your calendar and join what promises to be a powerful statement about the urgency of the climate crisis.

Des Moines, Iowa – December 17, 2019 – A coalition of 40 environmental, civic, justice, and faith groups is organizing a Climate Crisis Parade two days before the Iowa Caucuses, challenging voters and the media to act with urgency on behalf of our climate. This event marks the first time these local, state, and national groups have worked together to spotlight the urgent need for all to act on climate.

The Climate Crisis Parade is scheduled for Saturday, February 1 at 12:00 noon CT. Participants will gather at Cowles Commons, 221 Walnut Street, in Des Moines and parade to the Iowa Events Center, where media from around the world will assemble to report on the Iowa Caucuses. The action is non-partisan and not organized in support of any presidential candidate.

“Our core message is ‘We Challenge You!’” said Steve Shivvers, a member of the local chapter of Citizens’ Climate Lobby, who serves on the coalition’s steering committee. “Participating groups will walk with signs and feature ‘parade floats,’ calling out the climate impacts of greatest concern to their constituencies.”

One organization is planning a parade float that warns of the increasing number of extinct or endangered species affected by climate change. Others will call attention to this year’s historic flooding along the Missouri River, concerns about the Dakota Access pipeline, and the health impacts of climate change.

“Individuals and organizations interested in the Climate Crisis Parade should visit the coalition’s Facebook event or RSVP on Eventbrite,” said Kelcie Kraft of Urban Ambassadors. “When we work together, we can accomplish so much more, as was evidenced by the Facebook event launch last week. In just four days, our event garnered over 1,000 people indicating they were ‘going’ or ‘interested!’”