The Denver Post Excerpt: For Ed Fallon, the founder of an environmental advocacy group who attended Hickenlooper’s event in West Des Moines, the former governor’s policies on the environment and drilling are likely a nonstarter. Climate change, he said, is not an issue but a “crisis.” 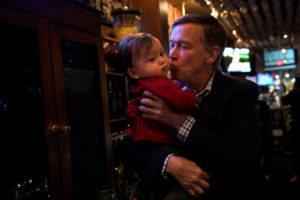 DES MOINES, Iowa — Chelsea Jacobs would be delighted to see a woman president. She’d love a person of color to be the next commander in chief. She yearns for a true progressive to take the country in a new direction.

But she doesn’t think the rest of the nation is ready for such a leader.

“We need to put that in the parking lot,” said the 31-year-old lesbian artist as friends and family admired her latest collection on the walls at Ritual Cafe, a vegetarian restaurant and coffee house in downtown Des Moines.

Instead, when Jacobs caucuses with her fellow Democrats a year from now in Iowa, she likely will support someone she believes can win over the masses in states President Donald Trump won in 2016, such as Florida, Pennsylvania and Wisconsin.

Jacobs is exactly the type of voter former Colorado Gov. John Hickenlooper hopes to win over between now and Feb. 3, 2020, when Iowans hold their first-in-the-nation caucus to pick Trump’s Democratic opponent.

Hickenlooper, who visited Des Moines on Sunday, is positioning himself as an executive leader with progressive values but a pragmatic, bipartisan approach to governing. Polling and some Iowa voters interviewed by The Denver Post last week suggest a moderate has a strong shot at the nomination even while many in the base seek someone who can pass a progressive-policy purity test.

Hard-core Democrats are hungry for a candidate who will advocate for drastic health care overhauls and tax reforms championed by liberal heroes such as U.S. Sen. Bernie Sanders and U.S. Rep. Alexandria Ocasio-Cortez.

A handful of voters who gathered at a house party Sunday to meet Hickenlooper audibly moaned and gasped after the Democrat, answering a question about education policy, name-dropped former U.S. Secretary of Education Arnie Duncan, an advocate of charter schools. Hickenlooper followed up and said he wouldn’t appoint a teachers union loyalist nor a charter school advocate to lead the education department.

Still, Hickenlooper’s team of advisers believes more primary voters will ultimately support a candidate who has a credible case to win over unaffiliated voters in suburbs and disenfranchised Republicans in rural America.

Some early polling suggests they’re right: A December poll by The Des Moines Register and CNN found that 54 percent of likely Iowa caucus-goers want a candidate who has a strong chance of beating Trump, while 40 percent said they sought a candidate who shared their positions on major issues.

Hickenlooper’s pitch for more compromise is refreshing to Runal Patel, a 19-year-old student who attended his event Sunday in West Des Moines.

“It’s so interesting to see a candidate come out and say he’s pragmatic,” Patel said. “Everyone else is in a rat race to see who is the most progressive. But I wonder if anyone is interested in that right now. The electorate is so angry right now.”

“The Democrats owe their new majority in the House of Representatives mainly to the fairly moderate first-time candidates who won in suburban and traditionally Republican areas,” Dallek said.

Progressive Iowans counter this claim with the fact that their 2018 gubernatorial candidate, whom they suggest ran as a moderate, lost.

Hickenlooper “needs to come out with a bold agenda,” said Jason Frerichs, founder of the Iowa Democrat’s Progressive Caucus. “He can’t just be another cream cheese candidate.”

Hickenlooper won’t be the only candidate making the case that a more moderate approach is the way to go. Among those who would run on a similar brand are former Vice President Joe Biden, Montana Gov. Steve Bullock and Minnesota U.S. Sen. Amy Klobuchar.

Ditto for Colorado’s U.S. Sen. Michael Bennet, who made national headlines this month when he forcefully shamed his peer from Texas, Sen. Ted Cruz, as he argued against the partial government shutdown.

And then there is former U.S. Rep. John Delaney of Maryland, who was the first Democrat to announce his bid for the nomination and already has five field offices open and more than 20 full-time campaign workers in Iowa.

A Democrat who isn’t afraid of a little bipartisanship is “what the American people want and need after the most divisive election of our lifetime,” said Monica Biddix, Delaney’s state director.

She added: “As Democrats, we’ve got to pick a nominee who can beat Donald Trump. We can’t make the same mistakes we’ve been making and forget about rural America and the Midwest. It can’t be about the Democratic base alone.”

Few Iowa caucus-goers The Denver Post spoke with are prepared to endorse any particular candidate. Even those who vigorously supported Sanders in 2016 are wary of backing him early given the large field of candidates.

Identifying the candidate with the best economic message will be crucial for Iowa voters, said Jessica Avant, co-chair of Iowa Women for Progressive Change. If the economy appears to remain strong, it will be a boon for Trump.

“The economy isn’t just about numbers,” she said. “The stock market doesn’t tell the whole story. It looks like there’s a lot of money going around, but there’s not. We have to show the economy isn’t working everyone.”

Sue Dinsdale, an organizer for Iowa Citizen Action Network, a political nonprofit that advocates for progressive economic policies and labor, said she thinks the election could become a debate about the moral fiber of America, which could well position someone with Hickenlooper’s temperament.

“I think people yearn for that,” Dinsdale said, referring to Hickenlooper’s brand of collaboration. “But we don’t want to see our values pushed aside in the name of compromise. I fear the other side will never compromise.”