Joe Biden’s campaign bulldozer rolled across Iowa last week. (Tune in to the Fallon Forum, 11:00-12:00 noon today, May 6, as Charles Goldman and I analyze Biden’s Iowa launch. You can also hear the conversation as a podcast and on KHOI 89.1 FM in Ames, KICI 105.3 FM in Iowa City, and other stations across the country.) 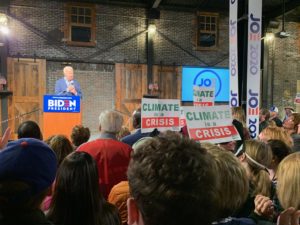 After stops in Cedar Rapids, Dubuque and Iowa City — where Biden barely mentioned climate change — he was confronted by the Bold Climate Penguin brigade in Des Moines. The birds immediately got Biden’s attention. He referred to climate change as “an existential issue,” adding that it’s “a crisis of enormous proportion,” and “the moral obligation of our time.”

But then a really disturbing thing happened. Toward the end of his speech, Biden boasted about America’s energy independence, saying, “The United States is soon going to be the largest producer of energy of any nation in the world by the end of the 2020s.”

Whoa! That “energy independence” Biden is so excited about refers to US oil production. Does Biden not see the contradiction between asserting the urgency of climate change while praising America’s ascendency in oil production? He can’t have it both ways. Either Biden “gets” climate change, or he’s aligned with Big Oil.

Oh wait. We know the answer. Here’s a quote from former President Barack Obama (while Biden served as Vice President), speaking in Texas on November 27 of last year: “American energy production, you wouldn’t always know it, but it went up every year I was president. And you know that whole, suddenly America’s like the biggest oil producer … that was me, people.”

1. Joe Biden has a problem. He just reiterated Obama’s pro-oil boast. If enough Iowa Democrats notice and sincerely care about the climate crisis (as polls indicate), that remark and Biden’s allegiance to Big Oil could tank his campaign.

2. Iowa Democrats have a problem — but are they honest enough to admit that their much-loved former president, Barack Obama, was no friend of the climate movement, Obama’s support for the Paris Climate Accord notwithstanding?

3. Opponents of the Dakota Access Pipeline (DAPL) have a problem. A politician who boasts of achieving “energy independence” implicitly supports the use of eminent domain to take farmers’ land and allowing DAPL to trample on the sovereignty of Native communities in the path of the pipeline.

4. Finally, Earth has a problem. If the next president isn’t on board with the full-scale climate mobilization demanded by science, Earth won’t be able to sustain life as we know it much longer.

Back to those pesky climate penguins. Penguins are often regarded as clumsy birds. But Biden’s clumsiness on the stump — revealing his true position on fossil fuels — makes penguins look graceful.

Now that Biden has dropped the facade that climate change matters to him, we’ll see if his support in Iowa plunges as quickly as global temperatures are rising. Perhaps there’s a chance that he’ll come around, that he’ll apologize for his culpability in making the US the world’s largest oil producer at the expense of farmers, Indigenous people and our climate.

Perhaps. But I wouldn’t bet on it.