We Are Iowa TV Channel 5: Our ‘Climate is a Crisis’ signs were shown on the local news. 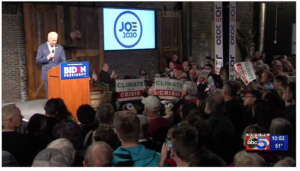 Hundreds came out to the River Center to hear the former vice president speak, hoping that they would hear a lot of fight in him. To know and feel confident that they can vote for him. The main take away from this speech is that Democrats have to win this next election.

Democratic voters in Iowa still not sure if they’ll be voting for the former vice president, but are hopeful his credentials will propel him through election season.