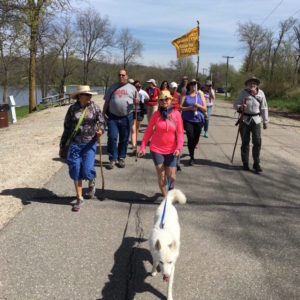 Searsboro is one of those small, forgotten Iowa towns bypassed by the main highway. It’s a sprawling community of 142 people, built on hillocks tucked away in a valley along English Creek. I’ve driven by Searsboro dozens of times, wondering what it was like but never bothering to stop.

From the highway you see only a few of Searsboro’s houses. Today, as our march winds its final mile over and around several steep, rolling hills, I feel like I’m walking into a town cloaked in a touch of mystery. 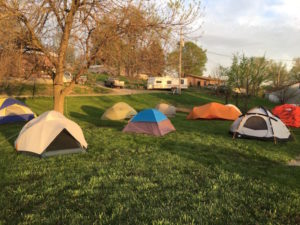 Our tent site in downtown Searsboro

Our campsite for the night is in the very center of town, on Main Street where The Little Bear Inn once stood. It’s now a grassy field, and though I’m sad to think that this was once a bustling center of commerce, the site is perfect for our tents.

Mayor Kim Shutts is a gregarious, dynamic community leader passionate about the well being and future of Searsboro. She’s an Independent who leans Republican, but has an open mind and knows something needs to be done about climate change. 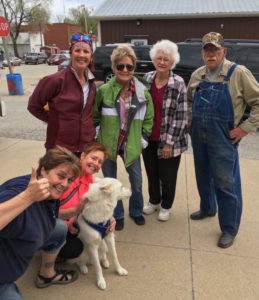 She reserves the Community Center for our evening program, and 15 people turn out for all or part of it. “That’s ten percent of the population,” I tell Kim. “If ten percent of Des Moines turned out for a meeting there, that’d be 20,000 people.”

A half dozen kids show up for Wendy and Mike’s puppet show. Chap makes pasta and several people bring side dishes and desserts. Before the meal, Searsboro resident Mike Moore offers a Christian prayer. One of our marchers, Fernando Manakaja of the Havasupai nation, prays in his Native tradition. It’s a powerful moment of unity. 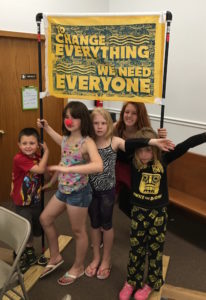 The kids of Searsboro made for an even more lively evening

The evening is a wonderful exchange of dialogue and fellowship, with lots of conversation about climate and the environment. Kim is intrigued by the wind turbines being built east of here, and is going to look into whether a turbine might be built on one of Searsboro’s hills. We also discuss with her the possibility of solar panels on some of the town’s rooftops.

It’s a beautiful evening, with the sun setting across the hills framing the western bank of English Creek. After dinner, a smaller group of town folk and marchers reconvene outside the Community Center. We joke around and play music. Kim’s got a nice voice and harmonizes well with Heather on “The Rose.”

I crawl into my tent later than I’d like. The day has been deeply satisfying. If more of this can happen — if each of us can go the extra mile and step out of comfort zone to break down the barriers that segregate us across geographic, cultural and political divides — surely there’s a pathway forward to a more sustainable future.