DES MOINES, IOWA — Dressed as penguins, Bold Iowa members staged an action at Andrew Yang’s campaign event in Des Moines today, calling Mr. Yang out for remarks he has made on climate change, and challenging him to prioritize the climate crisis. Six activists dressed as penguins were supported by other Bold Iowa members throughout the audience, two holding a large banner reading “LET THE PENGUINS SPEAK!” Today’s action marked an escalation in Bold Iowa’s Climate Bird Dog campaign to convince presidential candidates to make the climate crisis their top priority. 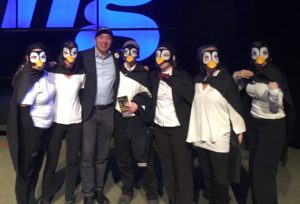 Over 200 Iowans have signed up as Bold Iowa Climate Bird Dogs. Since January, 80 have attended one or more presidential candidate events, pushing candidates to make the climate crisis their top priority. “So far, we’ve mostly asked candidates questions and held signs,” said Kathy Byrnes, who with Barfoot was instrumental in planning today’s action. “The Democratic candidates I’ve met are bright people. Yet with the exception of Governor Jay Inslee, they’re all treating climate like it’s just another issue. It’s not an issue. It’s a crisis, and candidates need to address it as such. We plan to continue ramping up our actions to make that happen.”

Bold Iowa’s mission is to build rural-urban coalitions to (1) fight climate change, (2) prevent the abuse of eminent domain, (3) protect Iowa’s soil, air, and water, and (4) promote non-industrial renewable energy. The organization was launched in 2015 to fight the Dakota Access Pipeline.