Des Moines Register Excerpt: Health care, climate change and education were asked about most and accounted for roughly a quarter of all questions asked in April.

After health care, Iowans were most curious about candidates’ positions on the environment and climate change.

Among their questions:How would you address food insecurity and sustainable food production? How will the Green New Deal affect farmers? Will you commit to a goal of zero carbon emissions by 2030 and end taxpayer subsidies for fossil fuels?

A smart staff, for example, might recognize local climate activist Ed Fallon, who joined with a handful of others in dressing like penguins to press Andrew Yang on climate change at an April 28 event in Des Moines. 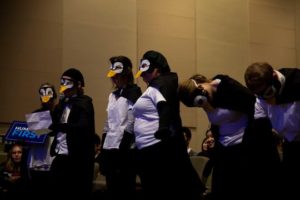 It was April 1 — a week before California Congressman Eric Swalwell officially announced he would run for president — and an auditorium full of high school students in Algona, Iowa, was already grilling him about his plans for the country.

“About your health care policies,” one student said into the microphone. “How would you pay for that?”

Swalwell didn’t simplify his answer for the students — many of whom will be allowed to caucus on Feb. 3, 2020. The congressman spoke about his plans to reinstate the inheritance tax, overhaul capital gains taxes and reduce national defense spending.

Other similarly probing questions followed: What would you consider an assault weapon? What will you do about the majority of murders perpetrated with handguns? What’s been the biggest lesson you’ve learned in your political career?

Iowans, granted unparalleled access to presidential candidates, take their role in vetting the would-be leaders of the nation very seriously. They pepper candidates with questions in high school gymnasiums, coffee shops and living rooms across the state.

Residents in the first-in-the-nation caucus state, through their interactions, drive the national presidential debate by defining the issues they prioritize.

Des Moines Register reporters fanned across the state in April to record the questions Iowans asked. During the course of the month — beginning with Swalwell April 1 in Algona and ending with Joe Biden April 30 in Dubuque — reporters attended 46 candidate events and recorded each of the 312 questions Iowans posed to presidential contenders there.

Many of the questions were pointed. Some were rambling. Collectively, they offer insight into the issues driving Iowans as they work to winnow a massive field of candidates this caucus season.

Health care, climate change and education were asked about most and accounted for roughly a quarter of all questions asked in April.

Cable news staple topics, like Russia and presidential impeachment, rarely were brought up — just a couple of times.

Jake Oeth, who led former Maryland Gov. Martin O’Malley’s 2016 Iowa caucus campaign, said Iowans’ questions require candidates to be nimble on the stump and aware of a diversity of topics.

“I think the willingness to show that you’re taking questions unscripted is valuable — it gives you credibility” as a candidate, he said. “… That has come to be the expectation over the years — for caucusgoers to be able to raise our hands and ask questions of the people who want to be president.”

As it did during the 2018 elections, health care dominates the conversation in Iowa; about 10% of all the recorded questions focused on the topic.

But even as the national conversation is centered on each candidate’s proposed iteration of “Medicare for All,” Iowans’ questions were much narrower and their interests more varied.

After health care, Iowans were most curious about candidates’ positions on the environment and climate change.

Among their questions:How would you address food insecurity and sustainable food production? How will the Green New Deal affect farmers? Will you commit to a goal of zero carbon emissions by 2030 and end taxpayer subsidies for fossil fuels?

New Jersey Sen. Cory Booker and former Texas Congressman Beto O’Rourke were pressed on their ties to charter schools. As mayor, Booker overhauled schools in Newark, New Jersey, with a focus on boosting charters, and O’Rourke’s wife, Amy, works for an organization that advocates for an expansion of charter schools in Texas. Each candidate reaffirmed his support for the public school system.

Some questions aimed to get at a candidate’s philosophical underpinnings: What’s the government’s role in public education, South Bend, Indiana, Mayor Pete Buttigieg was asked in Fort Dodge.

Others were very specific: Would your plan for free college be extended to the formerly incarcerated, and would low-income students be provided living stipends, Sanders was asked in Malcom.

Student loan debt, categorized as an issue on its own, was in the top 15 of subjects Iowans had on their minds.

She had the chance to ask Booker a question when he visited Boone, and said his answer showed her he cared about what he was talking about — and cared about her as a voter.

“It was like it was just him and I in that room,” she said. “… He was talking to me. I don’t think other places, other people, get that kind of connection with candidates.”

For candidates still seeking to grow their name recognition and introduce themselves to voters, the question-and-answer sessions are an important tool.

Wayne Messam, mayor of Miramar, Florida, and a little-known presidential contender, held his first Iowa event at a West Des Moines brewery April 29. There, he spoke for 20 minutes before taking questions. Then, for more than an hour, he answered whatever was on Iowans’ minds. The campaign was willing to let the attendees continue grilling Messam until they exhausted themselves.

“I haven’t had this long of a Q&A at any of the other events I’ve been to, so this was really fun,” said Clay Pasqual, a 23-year-old Des Moines resident who asked Messam about his plans to reform the criminal justice system. “Getting to really hear pretty much all of his issue stances at one event was pretty unusual.”

Iowans care about more than just policy. Among some of the most-asked types of questions the Register compiled were ones in which Iowans tried to get to know candidates in a personal way.

“Tell us about your immediate family. … Are you married? Do you have children?” Garry Puck of Manning asked Booker at an event in Carroll on April 16.

The question drew chuckles from audience members who, unlike Puck, knew the 50-year-old is a bachelor.

“You are not alone in asking this question,” Booker deadpanned. “My mom asks me this question every single day.”

The senator recently made public his relationship with actress Rosario Dawson after fielding questions about whether the country would be ready for a bachelor in the White House.

“I’m a single guy, but I’m in a serious relationship and very much in love,” he said in Carroll.

Some campaigns — including Booker’s — revel in those unscripted moments that showcase a candidate’s personality.

But, for others, unplanned moments can be nerve-wracking. Though campaigns work to carefully choreograph events that underscore their key messages, one impromptu interaction can hijack a candidate’s news cycle.

“I’m sure it drives communications professionals and staff crazy going off the script like that,” said Oeth. “But I think it allows the candidate an opportunity to connect on a personal level with the caucusgoer by answering their question specifically. To be fully prepared to be president, I think you should be able to answer questions on the issues of the day without having a two-hour prep session or poll-testing an issue.”

Former vice president Joe Biden, known for gaffes during his long political career, took no audience questions during his first events as a 2020 contender in Iowa.

Others, too, have skipped the question-and-answer sessions during their first trips to the state as they work to highlight a specific message during their campaign’s rollout. But in the weeks after, every presidential candidate who has campaigned in Iowa this cycle has taken crowd questions.

Oeth said campaign staffs who know the local activists and their pet issues are key in prepping candidates for what they might face when they take the stage.

A smart staff, for example, might recognize local climate activist Ed Fallon, who joined with a handful of others in dressing like penguins to press Andrew Yang on climate change at an April 28 event in Des Moines.

Or they might spot the young woman in the crowd with a “Will you go to prom with me?” sign and prepare a clever response for their candidate — like what happened at an April 4 O’Rourke rally in Sioux City.

“As someone who did not go to prom because no one asked me, I’m really touched,” O’Rourke told 17-year-old Claire Campbell, who asked him to join her at prom.

“But somebody told me about your sign, so we came up with a counter-proposal,” he said, holding up his own homemade sign.

“Will you caucus for me?” it read, prompting laughter from the crowd.

Though the risk can be high, so is the potential reward. For many Iowans, having a question answered directly and precisely can be persuasive.

“I thought he went above and beyond. I was shocked at how honest he was. It literally threw me for a loop,” Dante Powell, a 31-year-old Des Moines resident, said after asking O’Rourke a question about criminal justice at an April 6 house party. “I’m way more interested in what he has to say now. … Seeing him take questions and be in the moment on the spot was very impressive.”