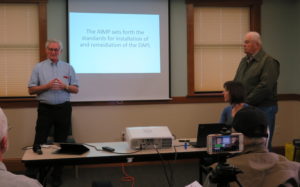 Bold Iowa and its partners are bringing a community forum to many towns across Iowa this summer.  The first event was held in Montezuma, Iowa, on April 21, at the Montezuma Public Library.

The community forum highlights two items. First, educational insight about the historic eminent domain lawsuit before the Iowa Supreme Court, filed by landowners along the route of the Dakota Access Pipeline and the Iowa Sierra Club. For detail on the case, see Supreme Court No. 17-0423. Second, view “Crossing the Divide”, a documentary by Ralph King. The documentary is about the 2017 Climate Justice Unity March, and shows the value of rebuilding trust and unity across political, cultural and geographic lines. See below for the full program agenda. 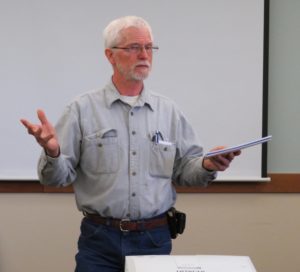 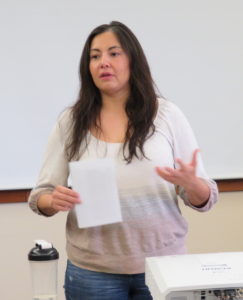 Some of the highlights of the Montezuma event included a slide show of farmland decimated by the pipeline installation in various counties by Keith Puntenney and Vern Johnson, two plaintiffs in the lawsuit from Boone County. Steve Hickenbottom, a farmer in Mahaska County and another of the plaintiffs in the lawsuit, spoke about problems he and his family have had with the pipeline company.  Attorney Wally Taylor of the Iowa Sierra Club discussed the historic lawsuit and what it means for Iowa. Christine Nobiss, founder of Indigenous Iowa, informed the public about the back lash of eminent domain abuse on the Indigenous people of Iowa.

The event wrapped up with Ed Fallon and Sarah Spain, of Bold Iowa, sharing details of the First Nation / Farmers Climate Justice Unity March that will be taking place in Iowa later this fall. The march will raise awareness of the lawsuit and abuse of eminent domain by the Iowa Utilities Board.