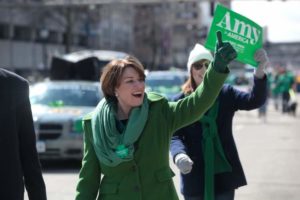 CEDAR RAPIDS — Minnesota senator and presidential candidate Amy Klobuchar told a crowd in Cedar Rapids that Americans “must cross the river of our divides,” a gap that she contends she could help usher the country over if elected president.

The three-term senator was in Cedar Rapids on Sunday during a round of campaign stops throughout Eastern Iowa that included the SaPaDaPaSo parade through downtown.

But before walking in the St. Patrick’s Day parade with the Linn County Democrats, Klobuchar participated in a meet-and-greet hosted by the Linn Phoenix Club at Raygun, with nearly 100 people in attendance.

The Democrat vowed to address climate change, introduce universal background checks for gun owners, reduce drug prices and provide universal health care. She also promised to instill a sense of peace and progress following what she described as chaotic leadership from the Trump administration.

“We have to cross the rivers of our divides, and there are great divides that are going on right now in this country that are exacerbated by the president,” Klobuchar said. “I always say we may look different, we may pray different, we may love different, but we all come from a country and live in a country of shared dreams. This is something that unites us, and this president keeps trying to divide us.”

Klobuchar announced her intent to run for president early last month, but this weekend marked her first visit in Eastern Iowa. She spoke to voters in Waterloo, Dubuque and Independence on Saturday before making her way to Cedar Rapids on Sunday. She also made a stop in Davenport on Sunday afternoon.

At Raygun, Klobuchar touted legislation she’s written in Washington, D.C., in the years since she was elected the first female senator from Minnesota in 2006, and cited a list of accomplishments. For example, when the Minneapolis bridge collapsed in 2007, she said she was among those who pushed for reinvestment in infrastructure. She cited a CNBC poll showing Minnesota’s bridges now are among the best in the nation.

Jason Snell, the director of the Cedar Rapids chapter of the Sunrise Movement, a youth-led political movement for climate change action, attended Sunday’s event. He said he and others in the group have been to candidate events to get a sense of their priorities.

“They’ve all spoken to it and when they do mention the work they want to do, those are some of the biggest applauses,” Snell said. “So I’ve been happy with a lot of them.”

Klobuchar was one of a handful of Democratic presidential hopefuls in the state this weekend, including Cory Booker and Beto O’Rourke.

Craig Wyrick-Solari, a Californian in the area visiting his sister, Anne Wyrick of Iowa City, saw some of the candidates in the past week. He said he still is deciding who to vote for, but agreed with Klobuchar that President Donald Trump is too divisive and plans to vote against his re-election bid.

“I would vote a cheese sandwich if it was a Democrat,” Wyrick-Solari said. “But that being said, we want the best candidate, and we want them to win.”