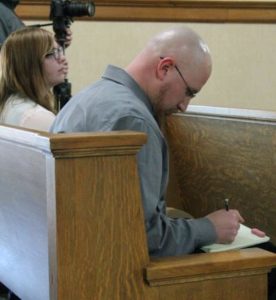 A six-person jury deliberated more than two hours Thursday evening before finding a Rockwell City woman and an Omaha man guilty of trespassing on a pipeline construction easement.

Emma Schmit, of Rockwell City, and Tosun Mahmud Fitil, of Omaha, said they were disappointed with the verdict, which their attorney plans to appeal.

“This is a clear case of the 1 percent versus the 99 percent,” Schmit said, referring to descriptions of the American population divided by the top 1 percent of wealth holders and the other 99 percent of Americans.

Schmit and Fitil were arrested Oct. 29, 2016, on Shirley Gerjets’ farm east of Rockwell City. They were part of a planned protest of the Dakota Access pipeline, which obtained an easement through Gerjets’ land via eminent domain. Schmit said she was opposed to use of eminent domain – government sanctioned taking of land for a project – because she didn’t think the pipeline was a public project or generated a public benefit.