The New York Times Excerpt: Ed Fallon, a climate activist in Iowa, who runs a group that dresses in penguin suits to confront candidates about climate, said Mr. Inslee’s challenge was not his age or his personality. He just needs to show up more on the campaign trail, he said.

“Iowans aren’t just enamored by charisma,” Mr. Fallon said. “Given Inslee’s laser-beam focus on climate and given that climate is the top priority of Iowa caucusgoers, he has a chance to end up in the top five or six candidates.”

Excerpt:
RAYMOND, N.H. — For years, climate change was an issue of passionate concern to a few voters, but never enough to ripple presidential politics. The Hillary Clinton-Donald Trump debates in 2016 notoriously did not include any questions from moderators about global warming. 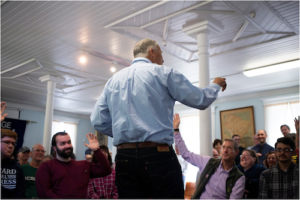 Mr. Inslee insists he will gain prominence as more voters learn of his record and his detailed policy proposals, which are getting high marks from activists. Credit Elizabeth Frantz for The New York Times

But after an alarming onslaught of floods, wildfires and catastrophic weather, dire scientific warnings about the impact of a changing planet and a president who dismisses it all, climate change has moved up drastically in polls of Democratic voters’ priorities. In some surveys, it has equaled or topped health care and jobs.

And that raises a paradox: Why is the only candidate making climate change the center of his campaign, who has rolled out ambitious policies and has a track record of achievements, Gov. Jay Inslee of Washington, stuck in the polling basement?

Mr. Inslee, a two-term governor who served 15 years in the United States House of Representatives (where he was a prominent opponent of the Iraq war), is polling between zero and 1 percent nationally and in surveys of early voting states.

At an appearance in New Hampshire over the weekend, he told a crowd of about 60, “This is a tremendous turnout,” a bit of campaign flattery, but one that drew attention to the fact that hundreds line up for better-known candidates.

Mr. Inslee, whose father was a science teacher, has been an advocate for action on climate change for decades. He has a ready explanation for why he is not polling higher: It is early in the primary marathon, and as a Western governor he lacks a national profile.

“The history of these things is successful, accomplished governors start at 1 percent,” he said in an interview. “That’s where Bill Clinton and Jimmy Carter started their climbs.”

Mr. Inslee insists he will gain prominence as more voters learn of his record and his meaty policy proposals, which are getting high marks from activists. On Friday, he was scheduled to join student protesters in Las Vegas who are demanding government action on climate change.

Representative Alexandria Ocasio-Cortez, a co-author of the Green New Deal resolution in Congress, told her four million Twitter followers last week that Mr. Inslee’s climate plan was “the most serious + comprehensive” by any candidate.

He speaks passionately about the moral imperative of the issue. “When I thought about what I was going to do with the rest of my life, I wanted to be able on my deathbed to look my three grandchildren in the eye and say that I did everything within my power to give them a healthy life and a nondegraded place to live,” he said in New Hampshire.

Mr. Inslee has proposed $3 trillion in federal spending to create eight million green energy jobs, while mandating that by 2030 all power plants are “carbon neutral,” all new cars are electric and all new buildings eschew fossil fuels for heating.

His rollout of two policy papers this month — one eight pages and the other 38 — with more promised, has been hailed by some climate activists as putting real meat on the bones of the Green New Deal resolution, which was criticized as a progressive wish list without details.

“I think this message is having increasing resonance, I feel this in the last 72 hours,” Mr. Inslee said on Sunday.

His campaign said donors rose 40 percent after he rolled out his climate policies this month, and he is expected to soon hit the 65,000 individual donors that are one of two criteria for making it into the first candidate debates next month.

At 68, he is the demographic opposite of Ms. Ocasio-Cortez and her supporters in the Sunrise Movement, the grass-roots organization of young people, including many young people of color, who mobilized energy for the Green New Deal.

A spotlight on the people reshaping our politics. A conversation with voters across the country. And a guiding hand through the endless news cycle, telling you what you really need to know.

In New Hampshire, he called himself a member of the “Woodstock generation.” Tall and square-jawed with neat silver hair, he looks like a dictionary illustration next to the entry for “banker” or “C.E.O.” He is earnest but not obviously charismatic. Yet, he hopes to be seen as a messenger for an issue with particular support among millennial voters.

Evan Weber, a leader of the Sunrise Movement, which is organizing the protest in Las Vegas, said generational differences were not holding Mr. Inslee back, and he pointed at the popularity of Senator Bernie Sanders with young voters.

Rather, Mr. Weber said, Mr. Inslee’s singular focus on climate change was, paradoxically, the reason he has yet to attract waves of millennial supporters.

“Young people and Democratic primary voters of course want to see a candidate putting climate change and the urgency of it at the forefront,” said Mr. Weber, the organization’s political director. “But we also want to see a candidate who is addressing the other issues we care about.” He listed affordable college, health care, racial justice and immigration rights.

Mr. Inslee is quick to say that climate change will affect myriad other issues including health care, the economy and social justice. On the stump, he promotes a broad progressive record: Washington State sued the Trump administration over its first Muslim ban and embraced a public-option health care plan, and the governor plans to pardon thousands of people with marijuana convictions.

Ed Fallon, a climate activist in Iowa, who runs a group that dresses in penguin suits to confront candidates about climate, said Mr. Inslee’s challenge was not his age or his personality. He just needs to show up more on the campaign trail, he said.

“Iowans aren’t just enamored by charisma,” Mr. Fallon said. “Given Inslee’s laser-beam focus on climate and given that climate is the top priority of Iowa caucusgoers, he has a chance to end up in the top five or six candidates.”

Mr. Inslee speaks forcefully about the need to tackle climate change beginning in 2021, or “we won’t have another chance.”

He favors abolishing the filibuster for legislation in the Senate to enact sweeping climate bills, a “nuclear option” that is regarded skeptically by most Democratic senators in the presidential race.

Mr. Inslee said candidates who think Senate Republicans will accept any climate legislation were fatally naïve about the determination of the majority leader, Mitch McConnell, to obstruct it. Mr. Inslee singled out former Vice President Joseph R. Biden Jr., who was the subject of reports saying he was considering a “middle ground” approach to climate change (which the Biden campaign pushed back on).

If it comes down to “let’s figure out something Mitch McConnell would be O.K. with after we’ve had a cup of coffee with him,” Mr. Inslee said, “that is a path to disaster for the United States.”

In New Hampshire, the governor appeared at a Masonic lodge with bead-board walls and old relief maps on the wall with countries labeled “U.S.S.R.” and “Burma.” The audience was a mix of voters as passionate about the climate as he is, and others kicking the tires on as many Democratic hopefuls as possible.
Joanne Devlin, a retired teaching assistant, had read recent reports by international scientists on warming and species extinction and said climate change was her top issue. But she was somewhat skeptical of Mr. Inslee’s chances. “I think at this point he’s a long shot,” she said.

Yukari Scott, 59, who has heard a dozen candidates in person, rattled off her hit parade. “Buttigieg is No. 1, then Harris, and I like Andrew Yang,” she said, referring to Pete Buttigieg and Kamala Harris.

Taking questions after his stump speech, Mr. Inslee heard from Van Summers, 33, who splits his time between his family in New Hampshire and an offshore oil platform in the Gulf of Mexico.

“I am the only guy on my rig who seems to think that my industry should go away,” Mr. Summers said, to laughter in the room.

As the governor mingled with the crowd, he stopped to speak with Mr. Summers. They had a deep-in-the-weeds conversation about nuclear power. Mr. Summers said the key to winning oil and gas workers’ support was to offer alternative jobs that pay just as well.

“If I could get a job installing windmills offshore,” he told the governor, “I would do that tomorrow.”

“We’re working on that,” Mr. Inslee said. “I believe it’s going to happen.”