Bold Iowa director Ed Fallon has been meeting with, working with and advocating for landowners living along the Dakota Access pipeline route in Iowa for the past 18 months. Below is some documentation of their stories of construction violations and eminent domain abuse.

Join our nonviolent direct actions to stop construction on the pipeline: 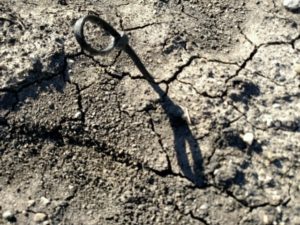 Cyndy’s farm has been in her family for generations. (Her grandfather was four-time national cornhusking champion!) Because she has been opposed to Dakota Access every step of the way, and is one of the nine landowners filing suit alleging Dakota Access should have been granted the authority of eminent domain, Dakota Access moved very quickly to install pipe in her ground as soon as they could. 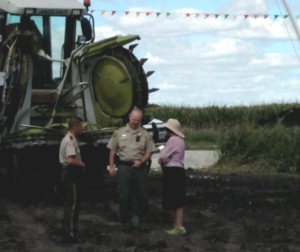 Not only did Dakota Access work in the rain, but when they filled the trench and covered the pipeline, they left wood, metal, plastic, rope and large rocks sticking out of the soil. Cyndy can only guess at what else is buried just beneath the surface, posing a hazard to farm equipment and complicating future farm work along the easement. 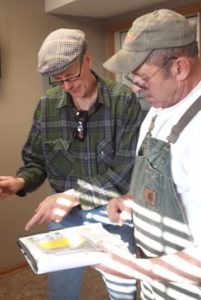 Randy’s land is flat, rich, black, and has drainage tile running across it every 50 feet or so. That tile cost $1,000/acre to install a few years back, and Randy suspects the work Dakota Access has done on his land will cause long-term disruptions in how well that tile flows.

Also, Dakota Access agreed to remove Randy’s topsoil down to a depth of four feet. Yet in July, he caught them turning the soil when it was pure mud. He had County officials out there on several occasions, and has numerous file reports and photographs of the situation.

Following are excerpts from the complaint David filed with the Iowa Utilities Board in September. The filing number is 2894040. In a separate complaint relevant to his timber, David told how Dakota Access agreed to separate the trees into three piles: lumber, firewood and brush. They agreed to burn only the brush, yet one night they set all three piles on fire, causing the loss of many thousands of dollars of quality wood. 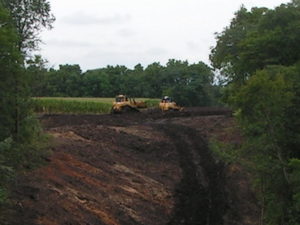 About the damage to his cropland and soil, David writes of how on the night of August 29th, nearly four inches of rain fell, triggering a flash flood warning. The next morning, despite County inspectors placing a ban on topsoil cat work, and despite his fields being mud, Dakota Access worked all day in the northern-most cornfield and the northern-most timber track.

David called County inspectors to complain, and the next day two came out to review the damaged field. Dakota Access official admitted they were in the wrong and asked what they could do to to ‘make up’ the damages.

David told him that since no sane person would ever do field work in such wet conditions, he was at a complete loss on how to advise the official. The soil structure/biological damage inflicted upon David’s land is known to last for years.

The next day, David spoke with a soil tilth expert from ISU, who stated emphatically that the damage was done and the soil “destructed.” 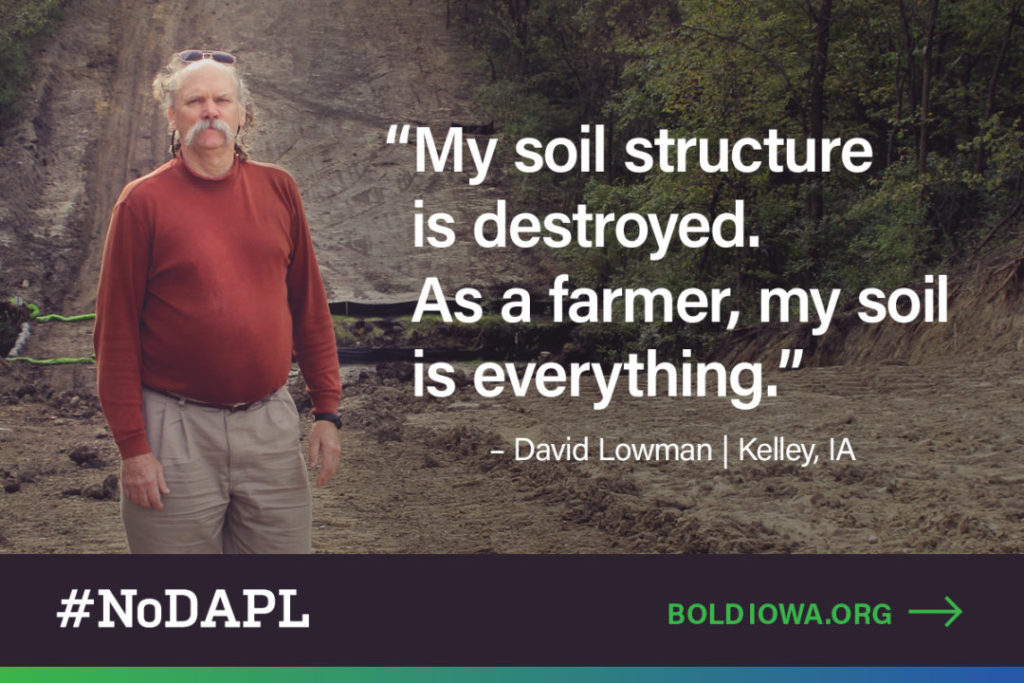 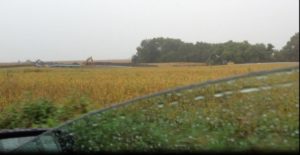 Dan wrote to me personally and also laid out in a complaint to the Iowa Utilities Board that he drove up to his farm in Washington Twp. to find several Dakota Access hoes working in the rain. Tracks cutting over the soft gravel roads made quite a mess. He stopped to ask when they were shutting down. The line inspector said “soon,” and they did stop in about 10 minutes. Dan doubts they would have stopped at all if he hadn’t said anything. 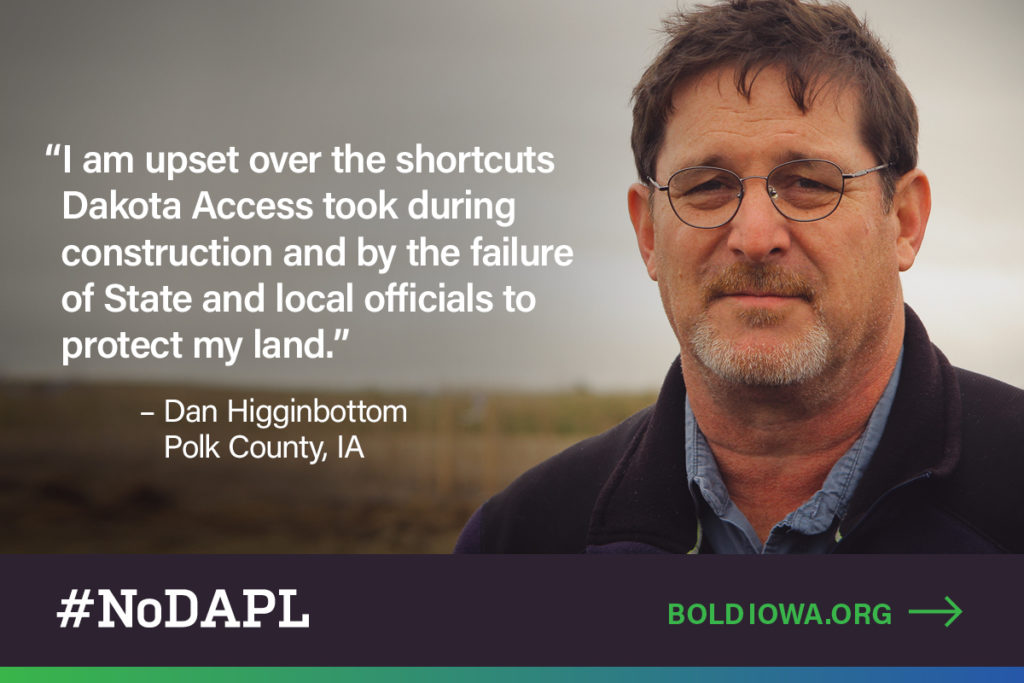 Kathy Holdefer was among the Iowa landowners facing eminent domain who was arrested during Bold Iowa’s direct action to stop construction on Dakota Access on Sept. 10. 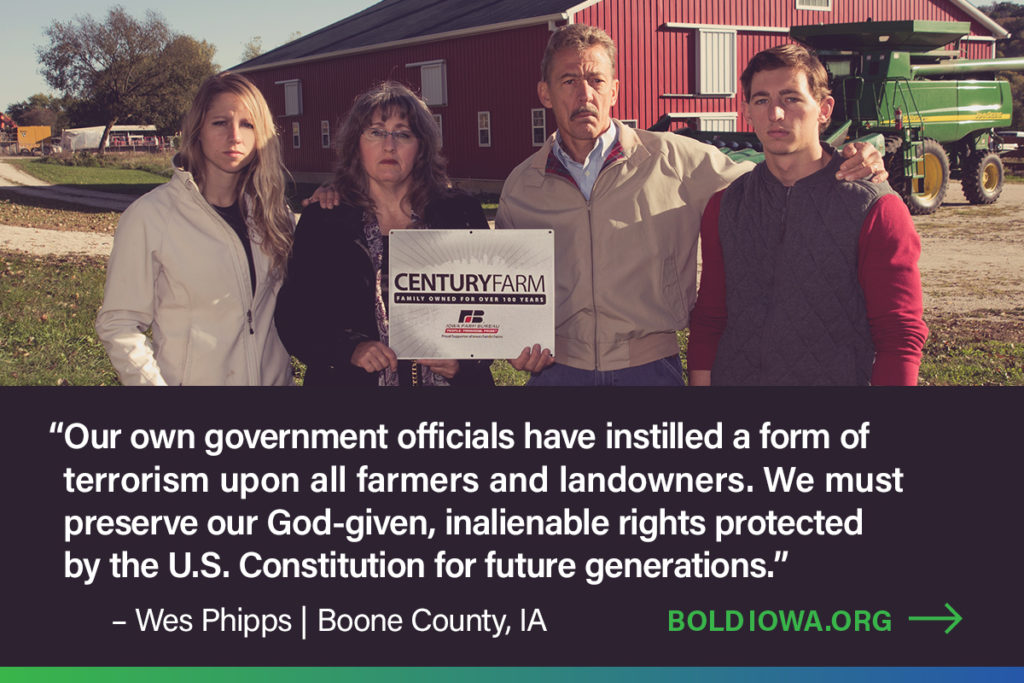 “This land has been in our family since 1879,” says Wes Phipps. “My Uncle, an Army infantry veteran of WWII (and Air Force veteran of Korea and Vietnam), named this land “The Victory Farm”in 1946. While fighting in the Pacific Theater during WWII, he was sending money home to his parents to purchase this land from a cousin. How could anyone explain to him, and others like him, a private company has the right to take his land if they wish? This pipeline is unlawful. It is in complete violation of the U.S. Constitution, which in fact, remains the supreme law of the land. If anything is deemed “legal”, but defies the Constitution, it is unlawful and thus is null and void. If our public officials continue to allow this pipeline to be completed, a dangerous precedent will be strengthened. Farmers and land owners are beginning to get a taste of how our government has treated our Native American brothers. The Cherokee’s “Trail of Tears” in the autumn of 1838 comes to mind. We must ask ourselves, “Do we really own our land.” In reality, the pipeline’s granted abuse of eminent domain clearly proves we do not. Let us all be thankful my Uncle, and multitudes like him, have passed away so their hearts are not broken. However, the torch of liberty is now in our hands. We must preserve our God-given, inalienable rights protected by our Constitution for future generations.

“The pipeline has been boring under the Des Moines River for over a month less than 200 yards from our home. They are running 24 hrs. a day and much louder during the night, making it very difficult to sleep. The vibration shakes the walls of our house and often results in headaches. Since harvest is under way and we are working long hours around machinery, we are very concerned about other people’s and our own safety. Another great concern lies with the enormous risk we, as a people, have put our clean water sources under. As Ishi, the last known Native American to live in the wild, stated around 1912, “White man very clever, but not wise.”

“Our hope remains for our elected officials to recall and obey their oath of office and cease construction of this unlawful pipeline. Financial gain should not be the driving force trumping our Constitutional laws? Let us all ask ourselves, “Can we breathe money, can we eat money, can we drink money?”

Sandy currently rents her land to tenant Mike Burgers, but as Sandy told me, Dakota Access agreed in writing to fence the area between the cattle and the pipeline trench. The fence was not erected until after work started, and when it was finally put up, it was poorly maintained. Cattle broke out constantly, on one occasion eight times in one day. They would get into Mike’s crops, and he was constantly having to stop his other work in order to attend to the problem. Frustrated, he eventually presented Dakota Access with a bill for over 101 hours of his time spent chasing cattle and repairing fence, due to Dakota Access’ negligence.