Earlier this month in testimony about climate change before the British Parliament, renowned naturalist, David Attenborough, said, “We cannot be radical enough in dealing with the issues that face us at the moment.”

Indeed, as people wake up to the utter urgency of our situation, it’s easy to understand how desperation might set in. I witnessed that five years ago on the Great March for Climate Action, when marchers proposed actions that, to me, seemed crazy:

Catapulting protestors over the wall of the Federal Energy Regulatory Commission building.

Gluing themselves to security officers.

Five years later, the climate crisis continues to accelerate. Even the World Bank admits that, on our current trajectory toward a planet that’s 7.2°F warmer, “the limits for human and natural adaptation are likely to be exceeded.”

As my own desperation deepens, I’ve gained empathy for those who, five years ago on the March, proposed questionable tactics to try to wake people up. They aren’t alone, and recently we’ve a growing number of activists:

Block a bridge in London during rush hour. Wrote James Mair, “I am 15. I’m blocking your commute so my generation has jobs to go to and a planet to live on.”

Glue themselves to the entrance to a congressional office building. (See The Intercept story.)

Threaten to shut down the flow of oil through an Enbridge pipeline. (See AP story.) 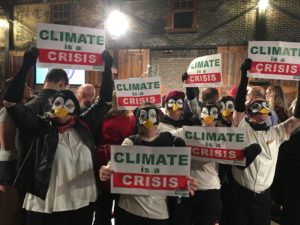 In the past, my argument against such tactics has been that they drive people away. A countervailing argument is that, through creating disruption and discomfort, they force people to confront the harsh reality of the climate crisis. With time running out, that’s a strong argument. I constantly struggle with trying to identify the right action and strategy. I certainly don’t have all the answers, and I invite your feedback and input.

But let’s be clear about one thing: Time is running out!

That’s not a political calculation. It’s a scientific reality.

Bold Iowa is currently focused on two priorities:
(1) Stopping the proposed expansion of the Dakota Access Pipeline, and
(2) Pressuring presidential candidates to promise to declare a climate emergency on Day One of their presidency.

We need an all-out assault against climate chaos — a Green New Deal. We need bold action, not timid half-measures. It must come from more than a handful of organizations. We need a cascade of people rising, a swell so deep and broad that it won’t simply be written off as a fringe anomaly.

If you don’t support someone else’s climate action, that’s fine. I understand how there can be all manner of disagreement over the best way to wake up a sluggish Congress and public. But if you’re content to sit on the sidelines and abdicate your responsibility to be part of the solution, you forfeit your right to criticize.