WATERLOO — In an attempt to stop the flow of oil through the Dakota Access Pipeline in Iowa, Trisha Etringer, a member of the Ho-Chunk Nation of Nebraska and Cedar Falls resident, will be one of nearly 50 Iowans marching from Des Moines to Fort Dodge, beginning Saturday.

The goal is to bring awareness to the landowner/Sierra Club lawsuit scheduled to be heard by the Iowa Supreme Court on Sept. 12. 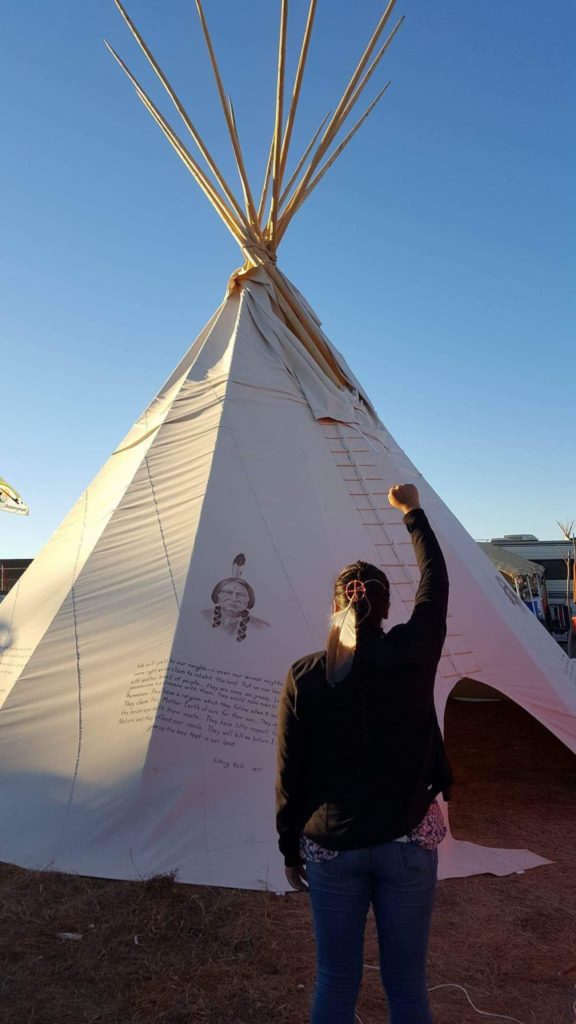 Trisha Etringer pays her respects to her Native American heritage during the protests of the Dakota Access Pipeline in 2016 in Standing Rock, N.D.

The 90-mile First Nation – Farmer Climate Unity March, organized by Bold Iowa and Indigenous Iowa, will unite Native Americans, farmers and environmentalists to highlight the lawsuit. They’ll follow the general route of the pipeline through Story, Boone and Webster counties and arrive in Fort Dodge on Sept. 8 for a celebration. Each evening, there will be a presentation facilitated by a Native American leader and an Iowa farmer.

“We march to let big corporate entities know that we have been and will continue to be here,” said Etringer. “We will not let the big dollar determine our future generation’s right to a clean and sustainable environment. We stand firm.”

Etringer discovered she had four biological sisters and a biological brother. Her older sister taught her the ways of the Ho-Chunk culture, including some of the native language.

In 2016, Etringer felt compelled to stand up for her Native American heritage as well as the environment by traveling to Standing Rock, N.D., during a protest in reaction to the approved construction of Energy Transfer Partners’ Dakota Access Pipeline.

“To see our people standing up and actually saying, ‘No, we’re not going to take this,’” Etringer said. “There’s been so many times where we haven’t stood firmly, and this is the time for our youth and our people to stand up together. I thought that was something that was really inspiring. I wanted to be there because I knew this was something historical. I wanted my kids to know that mom stood up for our indigenous rights, for our water, for something.”

Etringer was pregnant at the time and stood near the front lines where she was pepper sprayed and witnessed security teams unleash attack dogs on the crowd of protestors. She said she suffered from post traumatic stress for a while after the event.