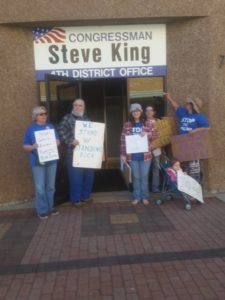 Emma Schmit of Rockwell City said the Fort Dodge protest wasn’t as effective as she had hoped it would be, since neither King nor any of his staff were at the office.

“We left a couple of signs for him,” Schmit said Sunday, talking about the protest, which about 10 people attended. All but one of the protesters were from Calhoun County, she said. “We talked to a couple of people as they walked by.”

Schmit has been active in protesting the Dakota Access pipeline. She is facing misdemeanor trespassing charges after being arrested during a protest on a Calhoun County construction site last fall.