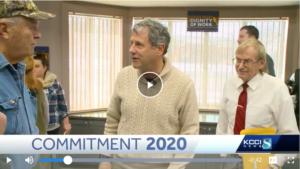 PERRY, Iowa (KCCI) — A Democratic senator from the political bellwether of Ohio stopped in central Iowa on Friday.

Sen. Sherrod Brown, a potential 2020 presidential candidate, spoke with farmers in Dallas County about the economic challenges they’ve been facing.

Brown said at times, government can ignore smaller communities, but instead should invest in them. He added that Democrats need to engage more with rural communities.

“Republicans have taken for granted rural voters,” Brown said. “The White House looks like a retreat for Wall Street executives who care nothing about rural or small towns, or even bigger city Iowa or Ohio. Democrats have to speak to workers.”

Brown said he’s still deciding whether to run for president. He will be in the eastern Iowa cities of Dubuque and Clinton on Saturday.