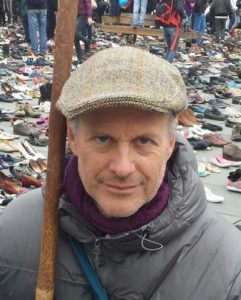 In every fight against injustice, there comes a point when men and women of conscience must defy laws allowing that injustice to persist. In the protracted fight to stop the Bakken pipeline, we have arrived at that point.

Over the past two years landowners, farmers, tribes and environmentalists have done everything possible to stop the pipeline.

We have pursued legal and legislative channels at great cost of time and money.

We have written letters and opinion pieces for our newspapers, spoken with radio stations and TV reporters, and written countless letters to government agencies.

We have learned more about pipelines, climate change, watersheds and eminent domain than we ever imagined we’d need to know. With the knowledge we’ve acquired, we’ve educated others — and public opinion has moved our direction. The most recent Iowa Poll shows less than half of Iowans support the pipeline while three-fourths oppose the use of eminent domain to build it.

We await court rulings on a lawsuit filed by ten Iowa landowners and another just filed by Tribal leaders in the Dakotas, and remain cautiously optimistic that the court will decide in our favor. But barring an injunction, those cases may take time.

Meanwhile our land, water, property rights and climate are being trampled.

From the perspective of our environment, Democratic officials like State Senator Mike Gronstal and Congressman Dave Loebsack either openly support the pipeline or refuse to stand with their constituents against it, despite grave concerns about the potential impact on our land and water.

As with many great struggles before us, when those elected to represent and protect our interests fail to do so, it is incumbent upon the people to challenge an unresponsive government through non-violent civil disobedience.

In this struggle against the Bakken pipeline, there are two key examples of the failure of law and government to respect and protect our rights.

First is the Army Corps of Engineers’ abdication of its responsibility to assure the safety of our waters. In issuing a permit to Dakota Access, the Corps failed to assess the full range of the pipeline’s probable impacts.

Second, the decision by the Iowa Utilities Board to issue eminent domain to a private company providing no service to Iowans is an assault on the sanctity of our right to own and enjoy property. If government can allow your land to be confiscated for an oil pipeline, where will the assault on liberty strike next?

Yes, it is time to defy an unjust law, time to defend liberty, time to fight the expansion of the fossil-fuel infrastructure and the accompanying destruction of our environment.

In the tradition of other great American struggles for freedom …

From the Boston Tea Party to the labor movement struggle to secure rights and freedoms we still enjoy and take for granted;

From the fight for women’s suffrage to the civil rights struggle of the 1960s;

From the Farm Crisis when farmers stood with their neighbors to block foreclosure auctions to the struggles happening now all across the country in opposition to fracking, pipelines and oil drilling;

… It is time to step forward and risk arrest.

Over a month ago, a Pledge of Resistance was circulated. The Pledge was initiated by Bold Iowa and supported by Iowa CCI, CREDO Action and 100 Grannies for a Livable Future. To date, over 1,000 people have signed the Pledge, which reads:

“{W}e are the conservatives, standing up for a safe and secure future for our families. It is those we protest, those who profit from poisoning our water, who violate our property rights, and who are radically altering the chemical composition of our atmosphere — and the prospects for survival of humanity — that are the radicals.”

If you are moved, please sign the Pledge and stand with us in a final attempt to stop this pipeline that our planet can’t sustain and most Iowans don’t want.