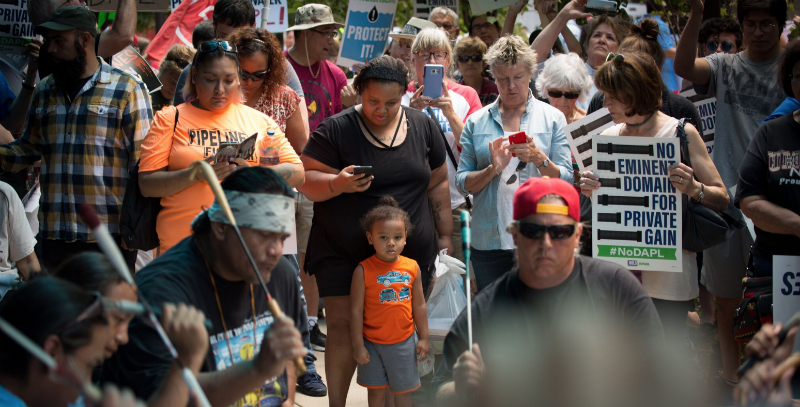 Omaha, NE — Tribal leaders from the Ponca, Santee, Winnebago and Omaha Tribe of Nebraska and Iowa will be joined by Bold Nebraska, Bold Iowa, People’s Action, Native Organizers Alliance and Four Directions on Thursday for a peaceful rally outside the offices of the U.S. Army Corps of Engineers in Omaha — to stand in solidarity with Tribal Nations and farmers and send President Obama the message to halt construction of the Dakota Access “Bakken” pipeline that threatens our land, water and climate.

Tribal representatives will present letters (see links below) to the Army Corps of Engineers demanding that the Corps follow proper regulations and its agreements with Tribes — and in doing so revoke permits granted for construction of the Dakota Access pipeline.

In addition to presenting their demand letters to the Army Corps of Engineers, to underline our message we’ll be offering Army Corps employees heading out to lunch muffins we made using corn harvested from the “Seeds of Resistance” sacred Ponca corn planted on land in the path of the Keystone XL pipeline that also lies on the historic Ponca Trail of Tears.

Tribal leaders will be also be passing out informational flyers to passersby, along with bottles of Lakota water to emphasize that “Water is Life.”

In the last few weeks, thousands of people from throughout the country have joined the Standing Rock Tribe in North Dakota to peacefully protest the construction of the Dakota Access pipeline, which has already desecrated burial sites, and could poison drinking water, and the water supply farmers and ranchers depend on for their land and livelihoods.

The Native Organizers Alliance, a project of the People’s Action Institute, is dedicated to building the organizing capacity of Native organizers and groups building grassroots power for change among native peoples across the continent.

Bold Nebraska is part of the Bold Alliance, building a coalition of small-and-mighty groups in rural states to fight Big Oil, protect landowners against the abuse of eminent domain, and work for clean energy solutions while empowering a political base of voters who care about the land and water.

People’s Action Institute is a powerful new force for democracy and economic fairness. From family farms to big cities, from coast to coast, we’re fighting for community over greed, justice over racism, and people and planet over big corporations.